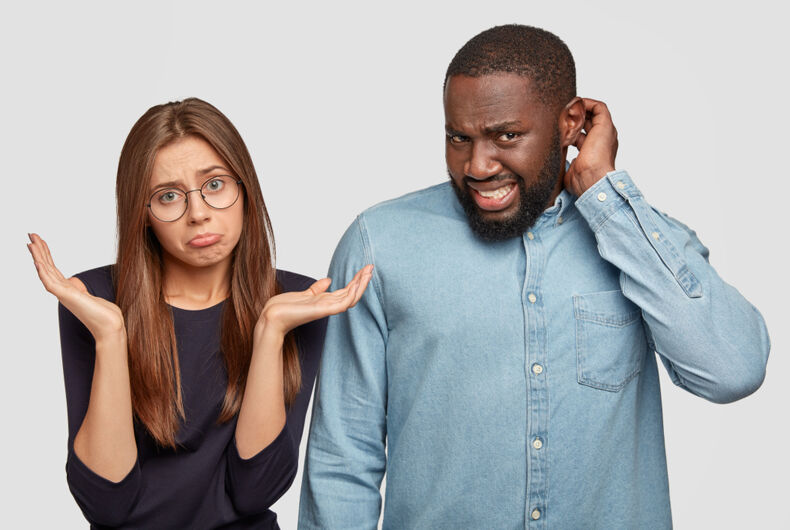 When it comes to predictability, few can match Andrew Sullivan. No matter what, he can be counted on to side with religious conservatism against his own people – particularly when he is pretending that he isn’t.

There is no better example of this than his reaction to the Supreme Court’s Title VII decision, masquerading as cheering for the decision but, in reality, a slur against the entire LGBTQ community (well, except for well-connected cis white gay male émigrés and others who feel immune from the realities of employment discrimination).

In fact, “predictable” doesn’t even begin to describe his rebroadcasting of the historical lie that in 1964 “transgender identity was too scandalous even to be conceived by most people” and its implied corollary that homosexuality was infinitely more accepted (despite the fact that gay sex had only been decriminalized in one state, a state that had affirmatively enacted legislation recognizing the change of sex.)

And then there is the command for civil rights activists to savor the two-vote court victory, go home and never speak of any need for anything more.

“The Equality Act, the key piece of Democratic legislation designed to update the 1964 Act to include gays and transgender people, is therefore moot,” Sullivan said of the Bostock decision. “The core goals have been accomplished without Congress needing to pass any new laws.”

That’s the difference between life and death for the Bostock decision. Twenty-one, not two.

Yes, two new Trump justices would gang up with Kavanaugh, Alito, and Thomas to use the next case to declare that Bostock was wrongly decided. And while it could happen relatively quickly, it wouldn’t be instantaneous.

However, a Trump victory, Senate retention, and 21 new Republican House members – bringing Kevin McCarthy into the Speaker’s chair – would virtually ensure that Bostock would be statutorily nullified by the end of the day on January 3, 2021.

And sure, ENDA or the Equality Act – had either ever been enacted – could just as easily be killed by that same gang o’ five.  That fact, however, only magnifies Sullivan’s detachment from reality.

“This comprehensive victory obviously presents the major institutions of the gay-rights movement with a dilemma,” Sullivan ponders. “What do they exist for after this?”

Wherever rank-and-file LGBTQ folks might happen to work, we should go into our HR office – or whatever part of the establishment conspicuously displays the “Equal employment opportunity is the LAW” poster.

There will be no changes to these posters adding “and sexual orientation and gender identity per Bostock v. Clayton County.” If those categories appear, they are on areas of the posters illuminating state laws that might explicitly cover us.

Why is that a big deal? Principle, first and foremost.

But people who make decisions to hire in the first instance see those posters on a regular basis. Some who make such decisions and who are predisposed not to hire LGBTQ folks will not be persuaded by such a poster to obey the law any more than they are persuaded to treat non-whites, non-Christians, non-males, and non-native-born Americans equitably.

But those posters do persuade some people to obey the law, even if their personal hatred for all members of all of the categories in question persists.

Little known fact: more than a few people don’t follow LGBTQ law and politics as closely as we do and some of those will forget about Bostock quickly.

When next you apply for a job in a world in which employment discrimination based on sexual orientation and gender identity are illegal under federal law, which would you prefer? The decisionmaker to be reminded of that fact in his or her office? Or leaving things to chance that the decisionmaker pays attention to Supreme Court precedent and hasn’t forgotten any of it?

Hence the trans anger any time the notion of judicial remedies for anti-trans discrimination as an acceptable equivalent to a hardwired statutory enumeration of “sexual orientation” was mentioned.

Bostock does go a long way to alleviating the third-class status of trans people in Wisconsin, the only remaining state with a gay-only state civil rights law. But not anywhere close to all the way.

And, oh, by the way, Wisconsin state law covers businesses with as few as one employee; federal law only kicks in for those with 15 employees.

So, even under the law according to Bostock, no Wisconsin employer will be reminded by the posters that anti-LGBTQ discrimination is illegal under federal law. But, under state law, Wisconsin employers – including gay and lesbian ones – with up to 14 employees remain free to refuse to hire trans people.

In History According to Andrew Sullivan’s Logic, all schools became functionally integrated the instant Brown v. Board of Education was decided, the Voting Rights Act of 1965 was never judicially eviscerated and no woman has ever been denied access to any form of reproductive healthcare since the ink dried on Roe v. Wade.

No one needs a Ph.D. in history or a law degree to distinguish that from life as it really is.

All of us need to be on guard against the inevitable attacks on Bostock – particularly those from within.

And we all still need enumerated federal statutory protections – because I don’t trust the Andrew Sullivans of the world not to discriminate against me any more than I trust Tony Perkins or Franklin Graham not to do so.

Pride in Pictures: Setting sail on the beach

LGBTQ people have been marching every June for 50 years