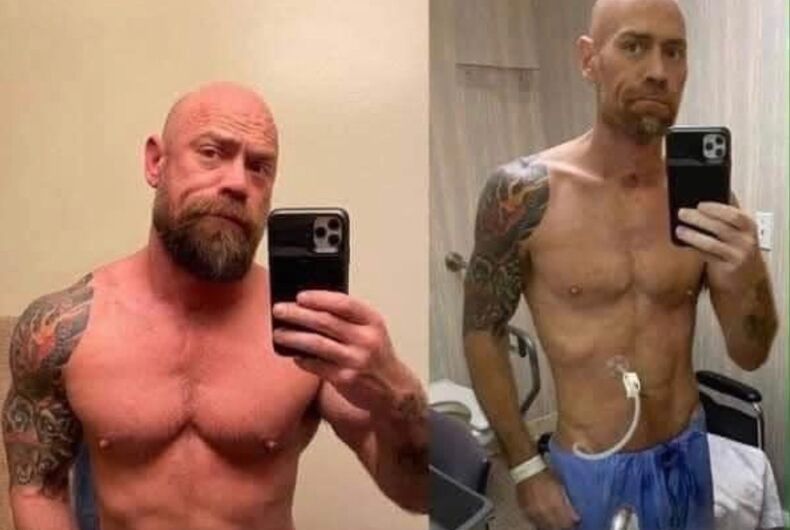 When Mike Schultz attended the National LQBTQ Task Force’s Winter Party in Miami, he had no idea what the consequences would be. Held right on the cusp of nationwide shutdowns and bans on large gatherings, several of the circuit party’s attendees later tested positive for coronavirus.

“I wanted to show everyone how badly being sedated for 6 weeks on a ventilator or intubated can be,” Schultz posted on Instagram along with shocking before-and-after photos of the toll the virus took on his body.

“Amongst other things, covid19 reduced my lung capacity with pneumonia. Over 8 weeks I’ve been away from family and friends Getting stronger every day and working to increase my lung capacity.”

At least three men have died from COVID-19. Schultz was hospitalized for weeks on a ventilator; approximately 90% of victims put on the machine do not survive.

A registered nurse from San Francisco, it was Schultz’s first time attending the bash. He traveled back to Boston with his boyfriend after the party and was hospitalized in New England.

He was released from the hospital yesterday several pounds lighter, but in good spirits – especially after being reunited with his partner. He’s a survivor.

After 57 days in the hospital/Rehab and not being able to see each other, Mike is finally coming home! I’m beyond happy to have him back in my arms and yes we are celebrating with McDonald’s. 🥰