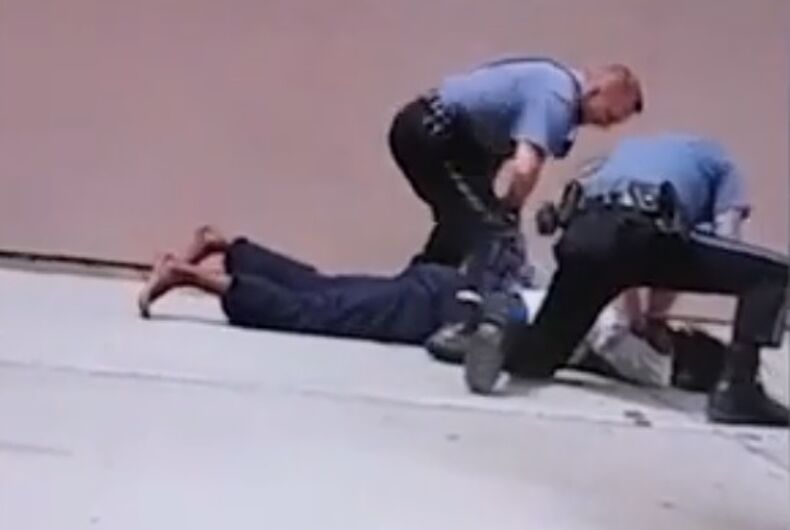 Two police officers are facing criminal charges in the alleged beating of a black transgender woman in 2019, several months before her death.

In video posted online last Friday, two white Kansas City, Missouri police officers appear to be holding a black transgender woman down while beating her head against the pavement.

According to local ABC affiliate KMBC, the officers in the video are Matthew G. Brummett, 37, and Charles Prichard, 47, and the woman they were beating in the video was Brianna Hill. The alleged use of excessive force occurred on May 24, 2019, almost a year ago.

Brummett and Prichard – the officers facing charges in connection to the beating caught on video – released a statement denying they did anything illegal.

The officers “maintain that the force they used was reasonable under the totality of the circumstances,” their statement said. “They vehemently dispute the basis of these charges and believe they will be ultimately exonerated in court.”

Kansas City Police Chief Rick Smith said in a statement that the officers were placed on “administrative assignment” as the investigation moves forward.

The Kansas City Fraternal Order of Police (FOP) called the prosecution “yet another example of a politically motivated prosecution that is unfortunately becoming all too commonplace across our country.”

The FOP accused Hill of beating her own head against the pavement in order to frame the cops.

“In fact, the Department’s thorough and complete investigation immediately following the arrest definitely showed that the arrestee purposefully struck her head against the concrete and that the officer’s subsequent actions of controlling her head prevented the arrestee from doing additional harm to herself,” the FOP’s statement said. “Importantly, the arrestee never filed a complaint against the officers or requested medical attention.”

Hill’s family, though, says that the charges aren’t serious enough.

“You don’t treat this woman like a piece of trash because you think she’s a freak,” said David Smith, the family’s lawyer.

“We miss Brianna, we really do.”

Jackson County Prosecutor Jean Peters Baker said that each of the officers involved in the alleged beating face a misdemeanor charge of fourth-degree assault for recklessly causing physical pain.

Baker said that she was forced to go to a grand jury to get an indictment when Kansas City Police Department investigators refused to give a probable cause statement, something that she said she usually only has to do when charges depend on the credibility of a witness.

In a press release, she said that it was “disappointing” that she had to go to such lengths to press charges