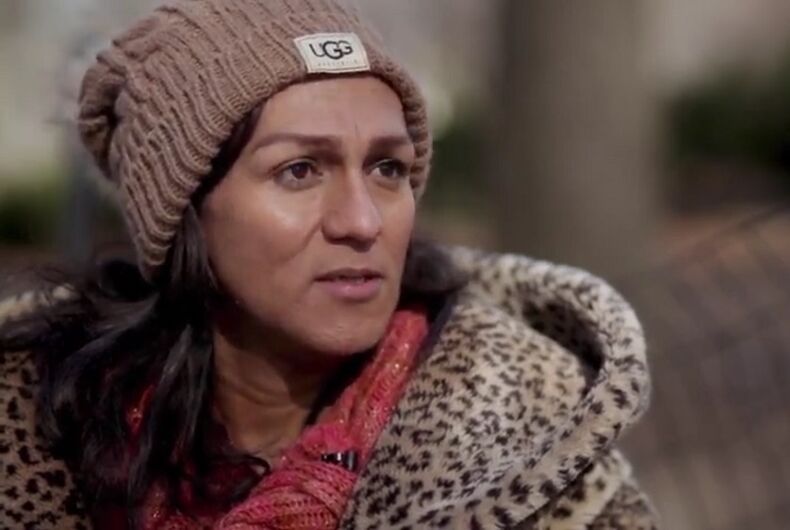 A latina transgender woman in New York City is suing the city after she was charged with “false personation” and allegedly harassed by police.

Linda Dominguez lives in the Bronx. She said that she was just walking home one night through a park when she was arrested, insulted, misgendered, and deadnamed by police and kept overnight in a cell in pink handcuffs in what she called a humiliating experience.

According to her complaint, she was approached by police last April as she was walking through Claremont Park to get home. They spoke to her in English, which she told them she doesn’t speak well.

Dominguez changed her name on her legal documents in 2017, but she had a previous arrest under her former name. So when the police asked for her name, she gave her former first name along with her last name – which hadn’t changed – as well as her address and date of birth.

The officers arrested her for being in the park after dark. She was taken to the precinct and she finally got to talk to a Spanish-speaking officer. She explained that she is transgender and gave both her former and current name.

Police put her in a cell overnight and she was kept in “nonstandard pink handcuffs” the whole night, according to her complaint. She also said that the officers misgendered her, deadnamed her, and insulted her, calling her “ugly” and “a man.”

The worst part of the ordeal was that she was charged with both criminal trespassing and “false personation.”

False personation is when someone “knowingly misrepresents” their name, date of birth, or address to police officers with the intent to keep the police from finding out who they are.

It’s a class B misdemeanor in New York, which can be punished with up to three months in prison.

To add insult to injury, the criminal complaint misgendered her.

The charges were eventually dismissed.

Dominguez said in her complaint that she was humiliated by the experience and that she’s now afraid of the police.

“As an advocate for my community, I could not let this go and allow police abuse against us trans women to continue,” Dominguez said in a statement, referring to her work with the trans immigrant organization Make the Road New York.

“The police must be held accountable and must learn to treat us with the same respect as every other human being.”

“Being transgender is not a crime,” said Donna Lieberman of the New York Civil Liberties Union, which is representing Dominguez.

Lieberman pointed out that the NYPD has guidelines against discriminating against transgender people that were violated. The NYPD Patrol Guide tells officers to use trans people’s correct names and pronouns and bans officers from accusing trans people of false personation for using a preferred name, even if their documents have not been officially updated.

Dominguez is accusing the police of malicious prosecutions as well as violations of New York state’s and New York City’s civil rights guarantees.

The NYPD did not comment on Dominguez’s suit but said in a statement that they are working on “effective policies, training protocols, outreach initiatives, and disciplinary processes.”

“The NYPD will continue to communicate and collaborate with the LGBTQ community as we seek to further strengthen our relationship with all of the communities throughout the City that we protect and serve,” the statement said.