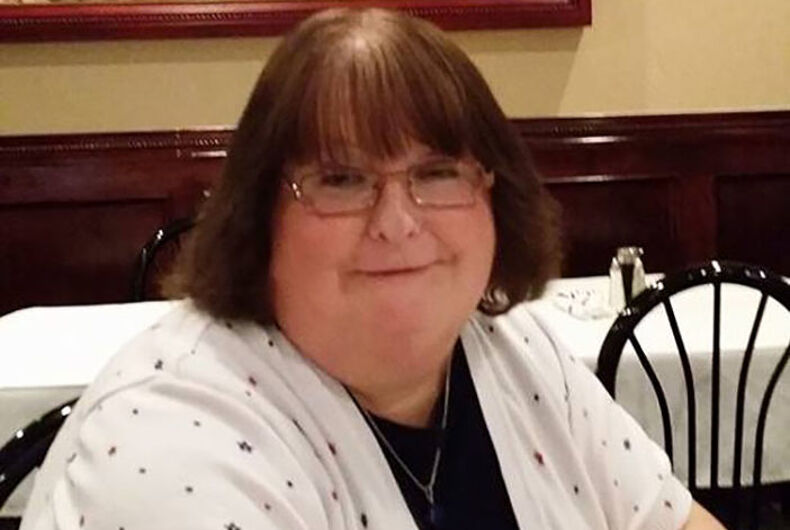 Aimee Stephens, the transgender plaintiff in a landmark employment case currently before the Supreme Court, has been moved to hospice care at home.

Stephens was fired from her job as a funeral director after she came out to her employer as trans. Her case challenges the firing, saying her rights were violated based on protections against sex discrimination.

Stephens has been receiving dialysis treatment, but is no longer able to continue the lifesaving procedures.

Friends of Stephens’ wife, Donna, have set up a GoFundMe to cover Stephens’ end of life care and funeral costs. So far it has raised a little over $5,000.

The average cost of a funeral is between $7,000-$12,000. Her contribution to trans people could be beyond value.

Stephens’ case, if successful, would uphold some employment discrimination protections for transgender people. Stephen’s case was consolidated with two other cases that involve gay people who are suing for the same protections.

The ACLU helped Stephens file a complaint with the federal Equal Employment Opportunity Commission (EEOC). The EEOC sued the funeral home on her behalf, and the Sixth Circuit Court of Appeals ruled that she was unlawfully fired and that federal sex discrimination laws protect transgender people.

After losing in court multiple times, her former employer petitioned the Supreme Court hoping that the court will give them a different decision.

The case was heard on October 8 and a decision is expected as early as this week.

The escort found overdosing with Andrew Gillum went to a birthday bash. He’s a former nurse.