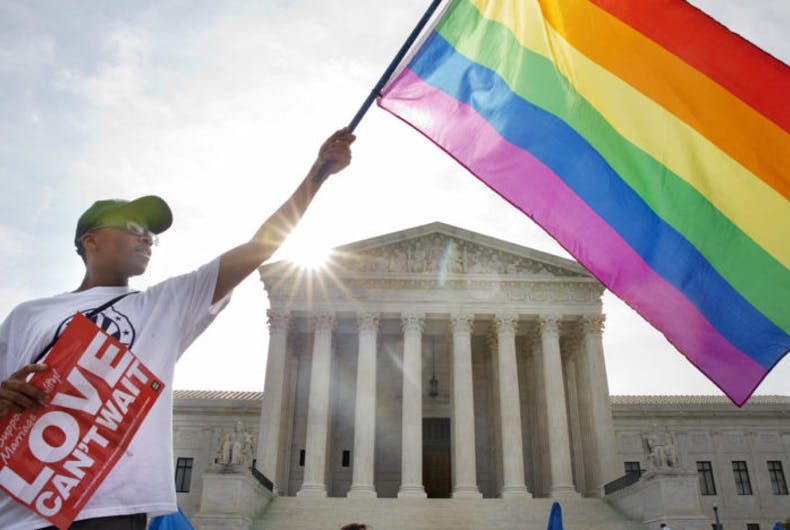 The cases have had varying levels of success, but they all make the argument that banning discrimination on the basis of sex necessarily bans discrimination against LGBTQ people.

Firing a woman because she isn’t feminine enough is discriminating against women, even if an employer could prove that they treat stereotypically feminine women fairly. This is discrimination that uses gender stereotypes.

And if that is sex-based discrimination, then discriminating against assigned female at birth but who identifies and presents as a man or a woman who dates women instead of men would be sex discrimination.

But it doesn’t seem likely that the Supreme Court will agree with this reasoning. The five-justice majority that supported several large advances in LGBTQ rights, including the Obergefell decision, no longer exists now that Justice Anthony Kennedy retired and was replaced by the much more conservative Brett Kavanaugh.

Republican-appointed justices now make up a majority of the Supreme Court.

“If a decade of increasingly ridiculous judicial opinions striking down Obamacare has taught the legal profession anything, it should be that, in politically charged cases, judges are more likely to behave like raw partisans rather than as jurists,” wrote Ian Millhiser at ThinkProgress.

The conservative argument that sex discrimination doesn’t mean discrimination against LGBTQ people, as the Trump administration has presented it, is that “sex” in federal law means “either male or female, unchangeable, and determined by the genitals that a person is born with.”

This argument misses the point, though: LGBTQ people face discrimination precisely because they don’t follow stereotypes associated with their sex assigned at birth.

For example, Aimee Stephens, the trans woman at the center of one of the three cases, worked at a funeral home and was fired when she said that she would be transitioning. Her employer said that she was “violating God’s commands” by presenting as a woman instead of as a man.

Donald Zarda, the plaintiff in one of the cases, was fired from his job in 2010 as a skydiving instructor. He strapped himself to a female client to jump and told her that he was gay to make her more comfortable. Her boyfriend later complained to Zarda’s boss and he was fired.

He argued that he was fired because he didn’t conform to the “straight male macho stereotype” of a skydiving instructor. If he were a woman who said that she had no sexual interest in women, his lawyers argue, then he would not have been fired.

The argument is at the center of several federal fights about discrimination protections for LGBTQ people, including at the Department of Education. Betsy DeVos has repeatedly said that she will enforce federal law when it comes to discrimination, which rings hollow since she rescinded Obama era guidance that said that discrimination against transgender students was illegal under the law that bans discrimination based on sex.

The Supreme Court’s decisions in the cases are expected by June 2020.

Roseanne complains that she can’t say ‘f*g.’ And did she just come out as queer?