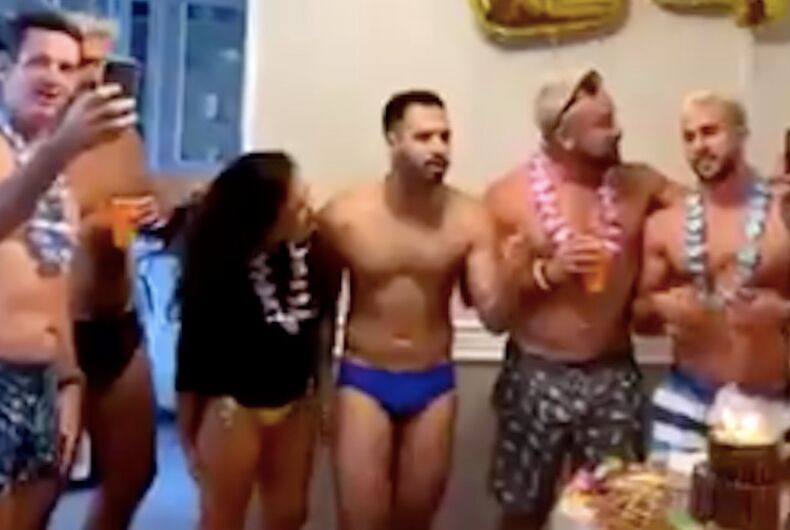 An image from a birthday party uploaded by Travis DysonPhoto: Twitter screenshot

Travis Dyson, the gay escort and former ICU nurse who was busted with former Florida gubernatorial candidate Andrew Gillum, uploaded a video of a weekend birthday party to Instagram, prompting fury at the lack of social distancing amid the ongoing coronavirus pandemic.

The incident evokes outrage over the recent New York City “Rona Rave” in which over 30 people, mostly gay men, crowded into a small apartment with no social distancing or facemasks. A DJ was present as well as at least one pharmacist and nurse. One attendee, gay adult performer Ian Frost, posted 60 Instagram videos from the party and has since deleted his social media accounts.

Related: Jerry Falwell Jr was caught at a Miami nightclub & lied about it. Now the photos are coming out.

Barely a year and a half after Gillum lost his historic bid to become his state’s first Black governor, he was caught by police on March 13, drunk and vomiting in a Miami Beach hotel room where Dyson was having an overdose near bags of crystal meth.

Gillum, a father of three married to his wife of 11 years, maintained that he had not done meth and promptly checked into rehab after saying that his election loss had sunk him into depression and alcoholism. Subsequent investigation of Dyson found that he “maintains a profile on” Rent Men, a “website for male escorts,” under the name Brodie Scott.

The New York Post reports, “Public records show Dyson has been a registered nurse for the past two years, but he voluntarily withdrew his license recently.”

Yesterday, a Twitter user named @touchmelovely posted a video that seems to have been taken from Dyson’s Instagram Stories showing a handful of gay men at a 24-year-old friend’s birthday party. The attendees are holding each other while not observing social distancing or wearing face masks.

THE AMERICAN GAYS. ARE YALL FUCKING KIDDING ME? WE ARE IN A PANDEMICCCCCCCCC pic.twitter.com/fwCmHWdP9A

Less than a week ago, Dyson posted images on his Instagram of himself “surrounded with beautiful weather, tranquil water, amazing friends” while celebrating his 30th birthday in Miami Beach, Florida. The images showed no face masks or social distancing.

Florida has had 38,828 confirmed coronavirus cases and 1,600 deaths, the vast majority of which came from Miami-Dade County where Miami Beach is located.