Tom of Finland has long been recognized as one of the 20th century’s great visual innovators. As he confronted the stigmas and stereotypes that long burdened homosexual desire, his depictions of empowered gay men fully enjoying their sexuality proved liberating on social and aesthetic levels alike. The sheer range of his influence on the culture at large is immeasurable.

Today, Tom would have turned 100 years old and many celebrations have been planned internationally.

Tom’s drawings are in the collections of institutions like New York’s Museum of Modern Art and regularly appear in museum shows throughout the world. His work assumes a key role in the art historical discourse, but also occupies a place in every corner of the popular imagination.

We celebrate this centennial to honor what this one artist contributed to humankind. Tom devoted his life, his artistic career that spanned over five decades, to the vision of homosexuals being free to be happy in loving whomever they desired – and in turn, for all of society to be supportive of his view. In many parts of the world, it’s not safe to be LGBTQ+, so there is still much work to be done.

As we celebrate Tom’s birthday, there are all kinds of celebrations afoot, from sexy online viewing rooms to special editions of Tom of Finland Organic Vodka in upcycled leather pouches (showing the organization’s typically wry and naughty good humor).

For a preview of the year to come, Let’s Go Camping With Tom of Finland ran in Kendal, UK in 2019 and charted the artist’s career including his famous comic series. In February, Brooke Wise curated a Tom of Finland Foundation fundraiser exhibition, I Won’t Bite as part of Frieze Los Angeles and included a range of artists who support the Foundation’s mission to protect and promote LGBTQIA art and artists.

Tom of Finland: The Darkroom opened in February and has been extended to June 19 at Fotografiska Tallinn in Estonia. It is temporarily closed but offers an online tour, a recorded TV interview and podcast with curator Berndt Arell.

Tom of Finland: Love and Liberation opened in March at House of Illustration in London and is scheduled to end June 27. It is temporarily closed but offers several online tours currently with Durk Dehner, and he will be in a live online conversation with the show’s curator, Olivia Ahmad tonight at 6p London time.

The exhibition features iconic, previously unseen drawings and will be slated to travel to other institutions.

Tom of Finland: 100 Years opened online at David Kordansky Gallery on 14th April and is on view through 12th May. The exhibition features never-before-exhibited drawings in pencil and pen and ink, as well as Tom’s personal collages.

So today, raise a birthday toast to Tom using a cocktail made with Tom of Finland Organic Vodka. 5% of all sales benefit the Tom of Finland Foundation.

You can also join the celebration by taking on the Tom of Finland 100th Anniversary Fan Challenge on Instagram. 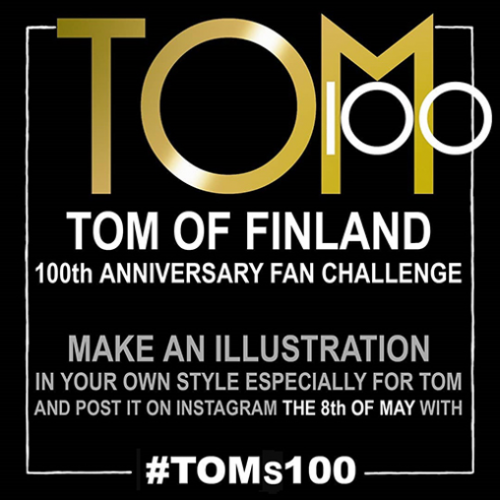 Tom of Finland defied homophobic censorship. He affirmed and glamourized our sexuality; giving hope and confidence to gay men at a time when many had internalized homophobia and sexual guilt. His imagery turned upside down the stereotype that we were weak and disgusting. It portrayed gay men as strong and desirable, which was refreshing and empowering. What Tom of Finland gave us was an antidote to the negative, demeaning heterosexual supremacist representations of homosexuality. — Peter Tatchell, British LGBT+ human rights activist

The old & new “Queer Eye” casts will face off on Celebrity Family Feud. Can Steve Harvey handle it?