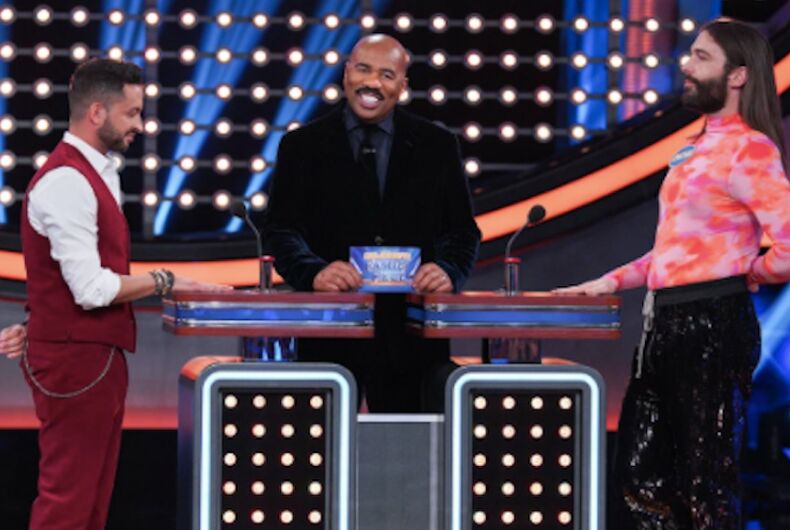 Get ready for an intergenerational battle as the old and new casts of the reality makeover show Queer Eye compete against one another for charity on the May 31 season premiere of Celebrity Family Feud, the game show where teams try to guess the most popular answers to everyday questions like, “Name the most common New Year’s resolutions.”

Related: A university made its health care trans-inclusive after employee called them out on “Queer Eye”

Hamilton, who appeared in season four of the show, will take the place of “Culture Guy” Karamo Brown.

Here is the trailer for the season six premiere of Celebrity Family Feud starring the new and old Queer Eye guys:

“I can’t wait to mop the floor with your cute little buns,” Kressley tells Berk in the trailer for the season six premiere.

Berk responds, “Oh honey, that’s really cute that you think you’re going to win, but we surveyed 100 people and they all think we’re gonna win.”

Kressley then calls his former co-hosts for “reinforcement.”

While Rodriguez declares, “Not only are we going to win, but we’re going to look real good doing it,” France responds, “Antoni and Jonathan are in full on feud prep mode, but do not get too cocky. We all know that there is only one person who gets to decide the true winner,” a reference to the show’s comedic host, Steve Harvey.

Although the trailer was filmed remotely and edited to resemble a virtual Zoom video conference, the actual episode was filmed in a studio before the start of the coronavirus epidemic.

The original Queer Eye for the Straight Guy aired from 2003 to 2007. It provided an important bit of gay visibility as Americans wrestled with the very anti-gay administration of then-President George W. Bush. It also went on to inspire no less than 13 copycat versions in Europe, South America and Australia.

The Queer Eye reboot premiered on Netflix in January 2017, changing its format from helping out “straight guys” to helping out women, gay and trans people too. The reboot has defined itself by making over people from rural, red-state areas and even people living in Japan. The show announced in March that its sixth season will take place entirely in the Texas capitol city of Austin.

Tom of Finland would be 100 today. Here’s how you can celebrate from home.