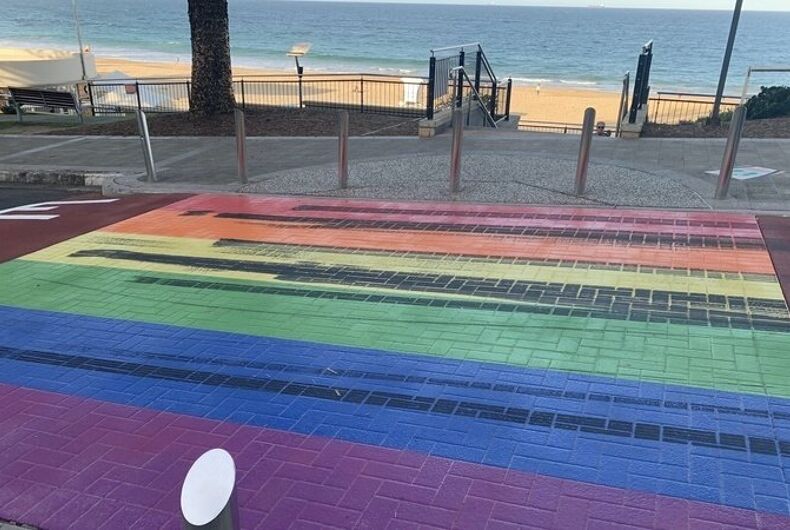 Wollongong, Australia’s rainbow crosswalk has been repeatedly vandalized, but the city’s leadership refuses to back down. Every time the culprit defaces it, the city cleans and repaints it.

Police still have no idea who is doing it and now nearby residents are demanding the town install cameras to catch the anti-LGBTQ vandal in the act.

During the unveiling, acting Lord Mayor Tania Brown shared her pride in the project, when it was unveiled on Christmas Eve.

“This is personal to a lot of people in the community,” she said. “It is an important visible symbol and there are people in our community who are still very much affected by homophobia. The trolls will always be out there, so having a physical symbol to show that everyone is welcome is so important.”

The trolls, however, didn’t take the remarks to heart and within weeks the crosswalk had been vandalized.

Brown pointed out that the location had a very slow speed limit and the town had simply had to spend “a little bit of extra money on some colored paint.”

The vandal had other ideas, however.

“Disappointingly, the skid marks have re-appeared blacker and thicker than before,” local resident Jeremy Boulton wrote on a petition to town authorities. “Local residents continue to hear burnouts occurring on the Rainbow Crossing from surrounding streets, well after 10 p.m.”

Boulton demands that the city install traffic cameras to capture the culprits and fulfill the mission of the crosswalk: to counteract homophobia and hate speech.

For now, the town continues to clean off the crosswalk each time the culprit strikes.