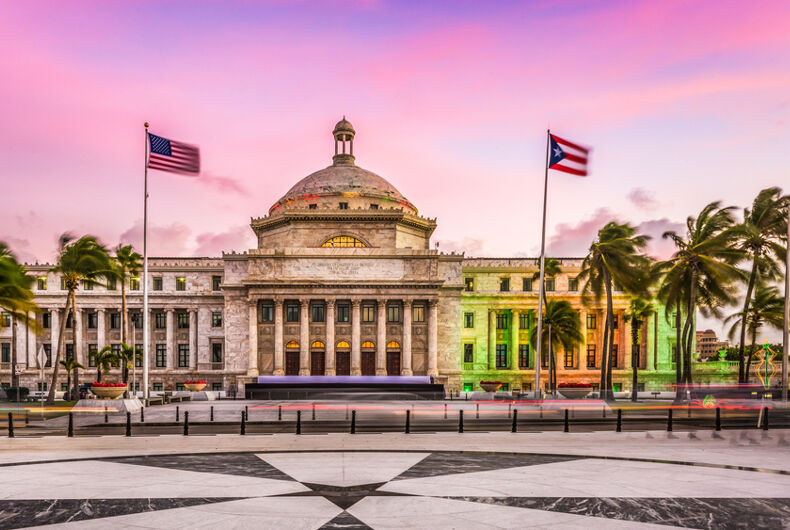 Legislators in Puerto Rico’s House of Representatives and the Senate rushed through changes in the 600-page Civil Code, reportedly approving “controversial amendments” in “less than 10 minutes” without any debate. Even now, the changes aren’t publicly available for citizens to review.

Among the reported changes is a mark on transgender people’s government-issued identification cards which will effectively out trans people rather than just listing their correct gender. A judge will also have to approve such changes to an ID in addition to already requiring a doctor’s approval.

The wording around marriage will reportedly refer to “natural persons,” a vague term that could be used to exclude LGBTQ people. It’s also said that the new civil code will deny couples, LGBTQ or straight, currently available government funding for child surrogacy.

The bill also reportedly includes changes to abortion rights and elections which could affect thousands across the island. In response, more than 93,000 have signed a Change.org petition against the new civil code.

“Puerto Ricans deserve a fair, transparent ratification process of their Civil Code, not a rushed, backroom deal by the legislature,” said HRC President Alphonso David. “The secrecy surrounding the codes and the legislative process is particularly troubling in the context of the COVID-19 global pandemic, which has critically hampered the ability for citizens to participate and make their voices heard. “

Gay Latinx pop star Ricky Martin tweeted a message at the governor to ensure that the newly proposed changes:

Governor Wanda Vázquez-Garced, we are awaiting an urgent and in-depth analysis of the recently approved Civil Code by the Senate of Puerto Rico, in a hurried process, without space for public hearings and in the midst of the pandemic we are experiencing.

The responsibility rests on you to listen to the claims of the people, stopping this approved model, and ensure that it does not reverse the rights already achieved by our Puerto Rican society in general. We’ll be alert.

In the past, the governor has spoken out against anti-LGBTQ hate crimes, including the recent murders of trans women, so there’s hope she may oppose the new changes or at least allow some public scrutiny before proceeding.