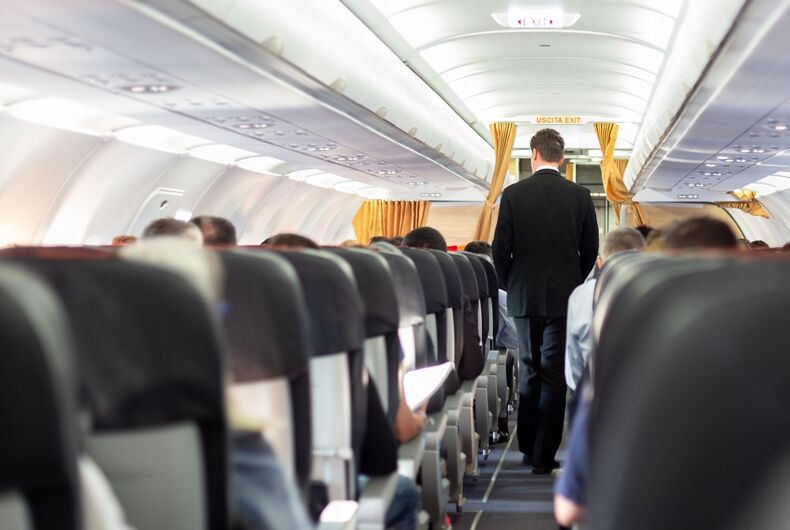 An unruly passenger was just sentenced to six months in prison for the sexual assault of a male flight attendant.

The passenger, Gavin Capps, was flying with EasyJet from Manchester, U.K., to Iceland for work this past January, when he attacked the flight attendant.

Capps had three beers on the flight and went to the front of the plane to get more, but he was sent back and told to wait for the in-flight service. When the duty-free trolley came down the aisle, Capps took 400 cigarettes from it and hid them under his seat.

Flight attendants warned him to stop causing trouble, but then he attacked.

A flight attendant who was serving another passenger said that he felt Capps “take hold of his left buttock and squeeze with a lot of force. He could feel his fingers between buttocks,” prosecutor David Calder told the court.

“He started shouting saying, ‘You are gay saying that I touched your bum,'” Calder said.

Calder said that Capps said, “You are not British if you think that is sexual assault.”

Capps went to the front of the cabin and started taking pictures, telling people “the gay boy is getting me arrested for sexual harassment.”

The flight crew called the police and he was eventually arrested when he went back to Manchester in March.

The victim told the court he was “humiliated and embarrassed” by Capps’s actions, saying it was particularly embarrassing because other people and children were watching.

The court sentenced Capps to six months in prison on one charge of sexual assault and one charge of threatening words or behavior.

Capps’s lawyer said that her client lost his job and his home since the attack, but “I fully understand why the victim is so angry, the defendant has struggled to accept that he behaved in this way.”

She said that Capps has since gotten married and gotten a new job since the attack and that he’s looking after his adult son, but that wasn’t enough to move the judge.

“You drank too much and behaved appallingly,” said Judge Bernadette Baxter.

“You have done exactly the same many times before,” she added, referring to Capps’s 105 prior offenses. “This time you were on an aircraft. In this circumstance the situation becomes a lot more serious.”

“You verbally abused [the flight attendant] in a homophobic way then sexually assaulted him by grabbing his bottom,” she added.

Capps will have to register as a sex offender for seven years.