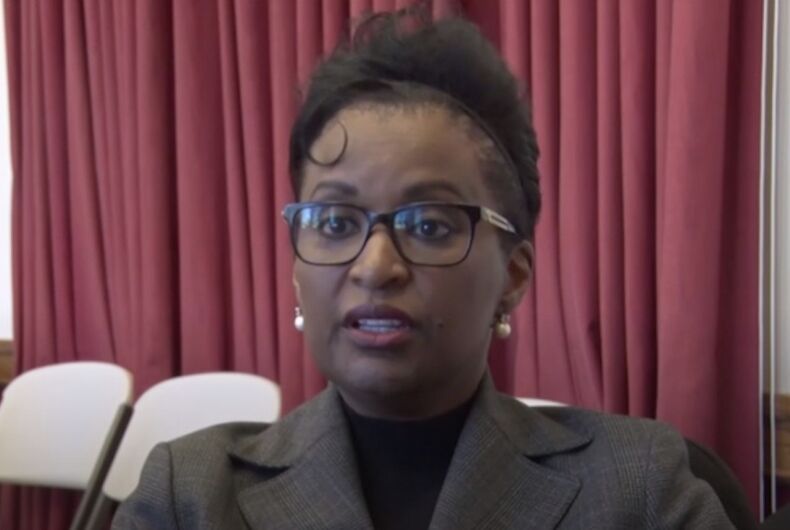 Robin Vaughn, a city councilwoman for Trenton, New Jersey called the city’s first openly gay mayor, Reed Gusciora, a “pedophile,” “a woman” and a “b*tch *ss” and also attacked another city council member during a 10-minute rant she delivered while on a Saturday conference call to discuss the city’s coronavirus planning.

Vaughn’s rant started when the mayor asked her to name one of the local “do-nothing local organizations run by [the mayor’s] friends” that Vaughn had publicly criticized on social media, according to The Trentonian.

Soon after, she called the mayor a “pedophile,” and said, “The only thing [Gusciora] brought into City Hall is a bunch of young boys, and they’re sitting up there in the mayor’s suite.”

When fellow City Councilman Joe Harrison tried to intervene, he called Vaugh a “crazy person,” and she replied, “Why don’t you go find your father, Joe Harrison? Go ask your whore-*ss mom who your father is. Everybody in this city knows who my father is, motherf*cker,” in a reference to Harrison’s estranged father. Harrison responded, “Be careful what you say, ugly.”

Although he later clarified that he meant Vaughn’s speech was “ugly,” she told Harrison that he could “continue to suck Reed Gusciora’s d*ck all you want to, motherf*cker.”

The mayor then called Vaugh “a child,” an “idiot,” a “little *sshole” and told her she needed “a lobotomy.” In response, she called the mayor a “motherf*cking drug addict pedophile,” adding, “You need to get the f*ck out of office and get the f*ck out of Trenton.”

Gusciora told NJ Advance Media, “This is pretty much par for the course, unfortunately, for the councilwoman. She went on a complete meltdown, a tirade.”

“Councilwoman Vaughn is unfit to serve the people of Trenton. There’s no need to parse words here: for her hateful anti-LGBTQ language and defending the anti-Semitic slurs of others, she must resign. Her words are an attack on the diversity of Trenton’s community, the city’s elected leadership, and our state as a whole. Any decent-minded New Jerseyan who believes in the success and future of our state’s capital should denounce this hateful rhetoric and call for her to step down immediately.”

Vaughn has neither made a public denial, an apology nor responded to calls for her to resign. However, she did issue the following statement on her Twitter account, implying that the aforementioned publication is biased in favor of the mayor:

“Trentonians, since I don’t have the privilege of having friends who are owners and/or editors of newspapers who will only write good things about me or my side of a story, then I will request the full audio or transcript be released so you, the residents and taxpayers of Trenton, will have the full context of the conference call.”

The publication has since released full audio of the call on its website. It confirmed that she was awful as reported.

If we start a conspiracy theory that COVID-19 turns you gay, would Republicans stay home?