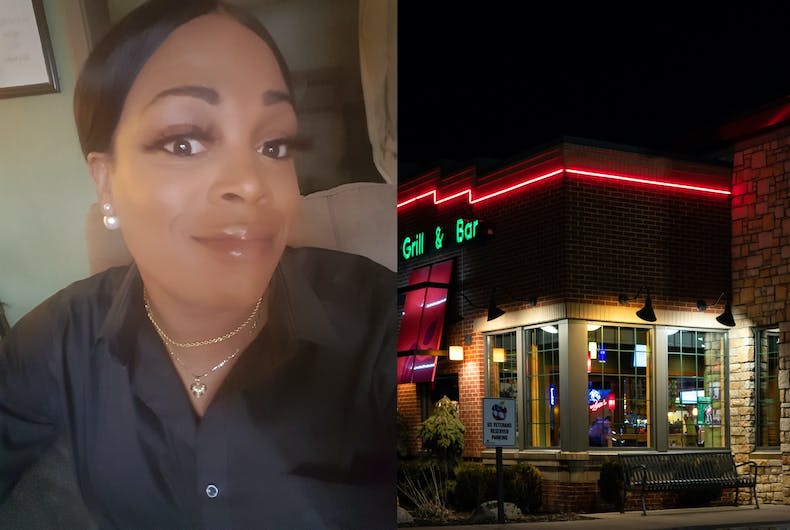 Berri Chaney says she was denied a job at Applebees after the manager found out she is transgenderPhoto: Composite

I felt my stomach cramp when I handed my driver’s license to the general manager for an Applebee’s near Jackson, Mississippi where I had been hired, hoping he wouldn’t notice that I was assigned male at birth or that it still listed my legal name.

He walked a few feet away before stopping, tilting his head sideways and turning around. His whole demeanor changed. He no longer looked me in the eyes.

Related: The woman at the center of trans employment case currently before the Supreme Court has died

Holding just the corner of my driver’s license between his thumb and forefinger, as if it were too gross to touch, he asked, “Who is this?”

I told him it was my driver’s license.

“Oh, nah,” he replied, shaking his head from side to side, realizing I’m a transgender woman. He told me to leave and call him later that afternoon, even though I had already been hired for the job as a hostess.

Later, on the phone, he explained that the problem was not my application. It was me: Berri Chaney didn’t look like the person described on my driver’s license.

He called me a puzzle that he just wasn’t willing to put back together.

For years I worked my way up the service industry ladder, from delivery person to waitress to the hostess. But after my hours were cut at another restaurant during hard times, I was invited to interview for the open hostess position at Applebee’s in January 2019.

As I watched the assistant manager interview seven other applicants, I began to wonder what chance I had, figuring the position had already been filled. I always worry that, because I’m a trans person, I’m not going to get the job.

But the assistant manager hired me on the spot when she learned that my years of experience made me extremely well-qualified. She told me I should receive more pay than what was advertised. She also promised me better hours and a share of the servers’ tips as well as the restaurant’s gross profits during my shifts. She even introduced me to the staff as the new hostess.

“This is going to be a new beginning for the both of us,” she told me.

In spite of my fear that being trans might make me unemployable, I didn’t have to pretend to be someone else to get this job. I was just Berri – very qualified Berri – and that was all I needed to be – or so I thought.

I arrived early for orientation, ready to work. The general manager told me he was happy to have me as the new hostess because they “need a pretty face up front” and I was “very beautiful.”

That’s when he asked for my ID cards and the whole thing went downhill.

In his eyes, I was no longer the “pretty face” that was perfect to greet diners, but a man pretending to be a woman.

I was devastated. My pain and hurt were contagious, infecting my social life, my work, my studies, and my marriage. I lost my ability to focus, enjoy life, and trust others.

I was also set back financially, including falling behind on rent. To make ends meet, I took out a title loan on my car and even pawned my wedding band and other valuables. I was lucky to get my wedding band back.

The whole episode ended in disaster, but it all started with such promise.

All I wanted was a job that I was more than qualified for, that I could do well, that I enjoyed doing, and that would provide for me and my husband. But Applebee’s turned me away because of who I am. I believe that this was illegal under a federal law that prohibits employment discrimination on the basis of sex.

Title VII of the Civil Rights Act of 1964 makes it illegal to discriminate against a person for employment on the basis of race, color, religion, sex, or national origin.

There now is a battle in the courts over the definition of “sex” in Title VII. There are cases now before the U.S. Supreme Court to determine whether or not employers can discriminate against LGBTQ workers based on their sexual orientation or gender identity.

President Donald Trump’s Justice Department and employers in these cases have argued that Title VII does not protect LGBTQ people.

If the Supreme Court were to decide that discrimination on the basis of gender identity does not count as sex discrimination, then Applebee’s wouldn’t have to make things right with me, and it could turn away every qualified trans applicant.

Mississippi, like many other states, does not have its own laws specifically prohibiting discrimination against LGBTQ employees, so we’d have nowhere else to turn.

I’m speaking out because I want every LGBTQ person looking for work to enjoy the security of a regular paycheck and to be able to provide for themselves and their families without fear of everything being taken away. No one should ever fear losing their jobs just because of who they are and no business should have a license to discriminate.

Berri Chaney submitted a charge of discrimination with the Equal Employment Opportunity Commission against Quality Restaurant Concepts LLC and has since received a notice of her right to sue.