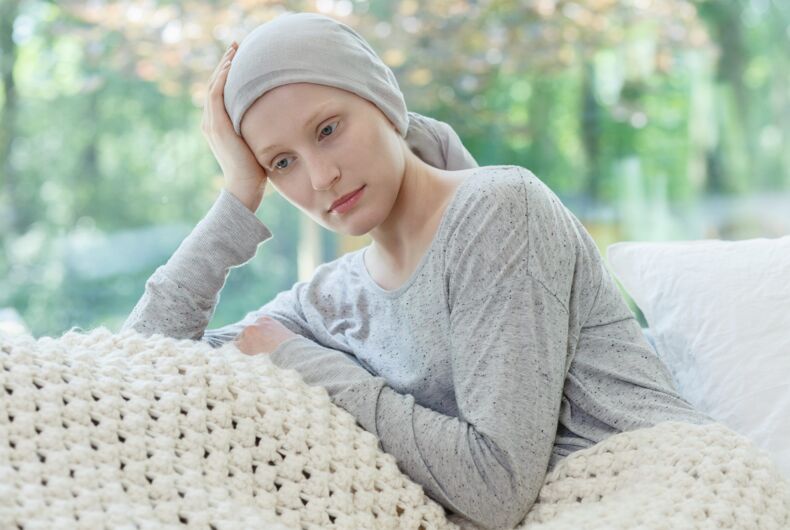 While the Bible instructs Christians to care for the sick and treat everyone with love and compassion, the Catholic church continues to purge school teachers under the guise of “religious freedom.”

While LGBTQ teachers have taken the brunt of the mass terminations, a California school is arguing that it has the “religious liberty” to fire Kristen Beil, a 5th-grade teacher who was diagnosed with breast cancer and asked for time off to receive treatment. She has since died.

St. James Catholic school in Torrance, California, is falling back on the same excuse other institutions have used to justify the terminations. They don’t argue that what they did was wrong; they argue that they have the right to do it if they want.

The schools justify the terminations by trying to classify the teachers as “ministers” who give religious lessons. Some of the staff members who have been terminated were not teachers or taught strictly secular classes like math.

Beil filed a federal lawsuit alleging discrimination based on disability status, but died before it could proceed to trial.

The Trump administration and the Los Angeles archdiocese claim that the “ministerial exception” that prevents the government from interfering in internal church employment decisions. It’s a common way for religious institutions to escape responsibility for violating normal civil rights laws.

The administration has also filed support for the church in other ongoing anti-LGBTQ discrimination cases.

Arguing on behalf of the archdiocese, the administration claims, “the ministerial exception should apply to any employee who preaches a church’s beliefs, teaches its faith, or carries out its religious mission”. Beil gave religious instruction four days a week.

The suit also includes another teacher who alleges she was fired because of her age.

“I’m really disappointed with the archdiocese for what they put her through,” Beil’s husband said, vowing to continue the lawsuit. “She made me promise to see this through.”

“While a slice of their classroom time involved instruction about the Catholic religion, [the two teachers] performed this duty strictly from workbooks, not as preachers of the faith,” Stanford law professor Jeffrey Fisher told the Los Angeles Times.  And they spent the overwhelming majority of their time teaching secular subjects.”

The Indianapolis archdiocese recently announced it would cease to recognize Brebeuf Jesuit Preparatory School, one of the top college prep schools in the nation, as a Catholic institution after it refused to fire a gay teacher.

Archbishop Charles Thompson used the same line of reasoning to justify the termination of the Brebeuf teacher. They did not teach religious classes or minister to students, but Thompson insisted they were “ministerial staff” and, therefore, must abide by all the diocese’s arbitrary demands.

“We will continue to offer a rigorous academic program that follows more than 450 years of Jesuit tradition and is committed to expansive and critical thinking, competent and compassionate ethical concern, creative and artistic expression, and excellence grounded in faith and the dignity of the human person,” the school shot back.

Turns out, the church’s threat was as thin as their defense against discrimination charges. The church could refuse to recognize them, but only their order can dissolve the school. They do not get funding from the church.