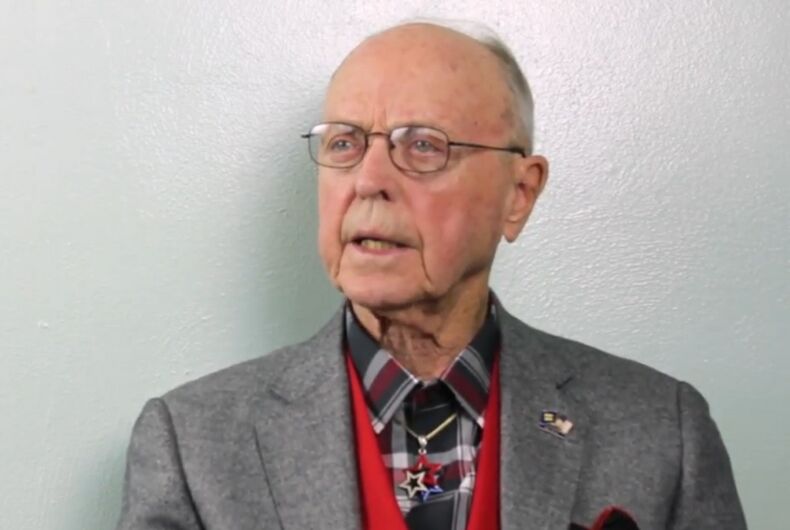 A 97-year-old gay man who fought at the Battle of the Bulge in World War II was attacked this past Monday in Columbus, Ohio, while on a walk.

Rupert Starr was held in a German prison camp for four months, fell in love with his partner of 53 years in 1954, and was a local LGBTQ advocate in Ohio, appearing in a documentary about Don’t Ask, Don’t Tell, the military’s former ban on LGB servicemembers.

Related: An 84-year-old elder volunteer was fired because she’s a lesbian

This past week, he was trying to give a beggar some money while on a walk, but instead he was attacked and robbed.

Columbus Division of Police Sgt. James Fuqua said that Starr was out on a walk this past Monday afternoon, keeping active despite reduced mobility.

“The man walks with two canes,” Fuqua explained, adding that Starr was “doing the best he can physically just to even be out and mobile.”

That didn’t stop Starr from trying to help someone in need, according to the police. A man he didn’t know asked him for a dollar, and Starr was willing to help.

“So he decided to give this man a dollar to help this person during this crisis,” said Fuqua. “He felt it would be appropriate to help him.”

Starr pulled out his wallet and gave the man money, and he turned to walk away on his canes. That’s when the man approached Starr from behind and tried to take the wallet. There was a struggle and the man allegedly pushed Starr to the ground before running away with the wallet. The wallet was found empty nearby.

According to police, Starr was not seriously injured and he is expected to recover.

Police have shared images from nearby security cameras of a man they believe may be responsible for the attack.

They are also looking for a second person of interest.

Starr fought at the Battle of the Bulge in World War II, Adolf Hitler’s last major offensive on the Western Front and also the largest and most deadly battle that the U.S. fought in the war.

According to Stonewall Columbus, he later volunteered to sneak past German enemy lines to carry a message to Division Headquarters and was captured by the German army. He was awarded a Bronze Star Medal for his bravery in that moment.

He was held in several overcrowded German prison camps for four months before he was freed by Russian forces and sent back to the U.S.

Starr went on to graduate from Ohio University and worked in real estate. In 1954, he met the man who would be his partner of 53 years, interior designer Allan Wingfield. Wingfield passed away in 2007 at age 80.

Starr appeared in Patrick Sammon’s documentary about gay people in the military, Courage Under Fire. He also served as the Grand Marshall of the 2009 Stonewall Columbus Pride Parade.

“Every day from now on is a free day,” he said his mother told him when he got back from the war. “And I am going to do something worthwhile, accomplish something. Every day. Every single day.”