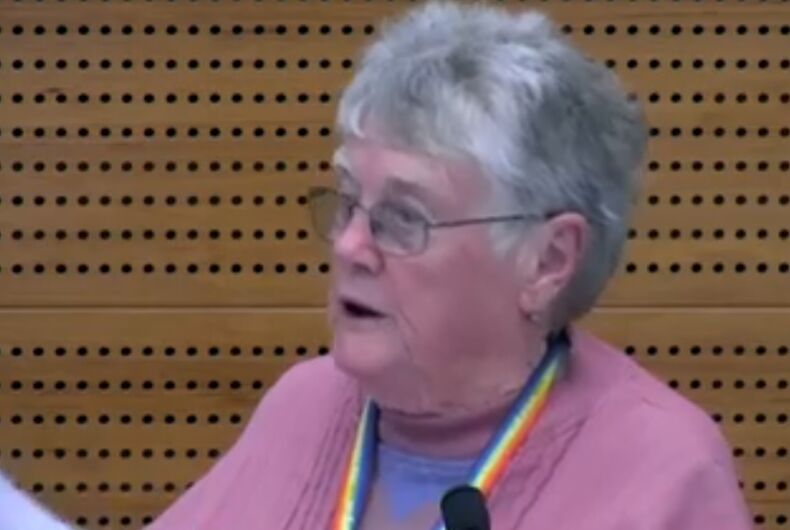 Malloy testifying before the Commission

An 84-year-old Australian conversion therapy survivor was told that she was no longer welcome as a volunteer visitor for the elderly because she’s gay.

The woman, who is only named as Malloy in the media, said that she started volunteer visiting elderly people in an aged care facility after her partner of 22 years died.

But she stopped in October, 2017, she told the Australian Royal Commission into Aged Care Quality and Safety earlier today. She testified that she received a letter that month from the facility telling her that there had been “a number of concerns” about her from residents and they wanted her to stop volunteering.

She said that the letter “didn’t make any sense” and that she couldn’t think of a single time that she acted inappropriately with the residents.

So she scheduled a meeting with the nurse manager at the facility, which she said was “very uncomfortable.”

Malloy asked the nurse manager about what was in the complaints, but the nurse manager said that she couldn’t disclose that information, but that Malloy “was not allowed to talk about [her] sexuality with the residents.”

“We don’t have people like that here,” the nurse manager allegedly said, “and people don’t want to hear about things like that.”

“The Manager said that I’d been kissing some of the residents and I said to her well that’s not true,” Malloy said in a separate interview with The Feed earlier this year. “The last person I kissed was my partner after she died.”

“It was clear that she had a homophobic bias towards me,” Malloy told the Commission.

She said at the hearing that she didn’t “actively” speak about being a lesbian with residents, but if she was asked about her rainbow lanyard she would explain its meaning.

Malloy said that the experience brought up painful memories from when she was younger. Her mother used to beat her for being gay and her father would call her insulting names.

When she was 25-years-old in 1960, she had a breakdown and was put in a psychiatric facility.

“I was told that if I ever went back to being a practicing lesbian, God would not love me,” she said. “My psychiatrist tried various types of conversion therapy on me including electroconvulsive therapy and LSD treatment.”

LGBTQ elders often feel that they have to go back into the closet in order to get care.

“I’ve talked to people who’ve been through it, they put photographs away of their boyfriend or their partner or their girlfriend,” a 70-year-old gay man said. “It’s just a horrific thing.”

“You feel like you’re back on that alien planet, and you’re the illegal person, you shouldn’t be there.”

Samantha Edmonds at Australia’s National LGBTI Health Alliance said that part of the problem is that LGBTQ elders often don’t have children to advocate for them and few options if they face discrimination.

“There’s no consequence for a provider that’s not inclusive,” she said.

A gay student was nominated for homecoming king. Then the backlash started.