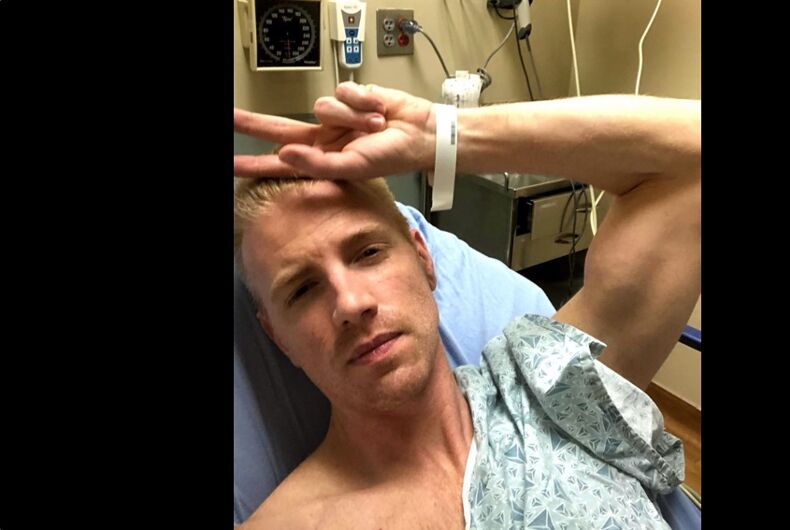 Out Walking Dead actor Daniel Newman has been hit with a $9,000 bill for a coronavirus test, but he never got the results. In fact, the test was never even processed.

Newman’s insurance company refuses to cover the cost and while recently passed legislation requires insurers to waive cost-sharing for coronavirus testing, Newman sought medical help before the law was passed.

“I started to get a fever, just started to feel kind of chills, and I was just like, ‘Oh crap, you know, whatever they had, I think I got it,'” Newman told CBS News.

After calling around, he found an emergency room that had the ability to test him and doctors told him go in and get tested. But after he was swabbed, they told him they couldn’t actually process the sample.

He said the doctors told him, “We are not allowed to process the test because there’s a really limited bandwidth of capacity on how many tests can be processed per day, and so we’re not allowed to send off the tests for anybody that has mild symptoms.”

After he asked if he was going to be billed for a test that couldn’t be finished, he said they told him he’d be on the hook anyway.

Thanks for all the concern! I guess a lot of #WalkingDead fans saw me in the emergency room regarding #CoronaVirus. Sorry I didn’t reply I needed time to process. So here’s what happened. Yes I was just in Australia with Sam Smith, Dua Lipa, and thousands of people from around the world for Mardi Gras Pride. I was exposed to some sick people and I started developing symptoms and then back in the states I was notified someone in our group tested positive for #Covid19. I spent all day calling every urgent care and hospital no one had tests! Finally I found one emergency room that told me my symptoms match and to come in immediately. I did all the tests and they told me because I have “mild symptoms“ the government won’t allow them to process my tests! They don’t have enough they’re not prepared, even though all my symptoms match. They’re only allowed to process “severe symptoms, elderly, or people recently in Italy and China”. It cost me $9,116!! and they didn’t even give me results. They sent me home and tons of other ill people that could potentially infect their communities, just telling us to “self Quarantine“. Why after almost 3 months since China is our country not prepared with tests, masks, hand sanitizer, toilet paper! Why after one day of shaky stock markets did they invest 1.5 trillion into the markets, but not the Healthcare system after three months! This was not a surprise, this was not being prepared. We’ve already gone through #H1N1 #SARS why didn’t we have a pandemic unit ready when this happens every few years!? Everyone please treat each other with kindness and Love ❤️! We are all going through this together. Young people are not immune, thousands of people are dying around the world. Please be safe, wash your hands, stay 6 feet or more away from people and stay home. I love you guys so much you can get a hold of me on here or Twitter if you need to talk I’m here for you. Love – D

“And they were like, ‘No, you just came into an emergency room, it’s gonna be thousands of dollars,” he said.

“That, not even on a personal level, on a humanitarian level, that infuriates me. The fact that no one can afford this. How can… a family of two or four kids afford even one person at $9,000, much less four people?”

Some insurance companies like Cigna, Humana, CareFirst, and Aetna are waiving co-pays for testing but also treatment. Not all companies have gone that far.

CBS reports that they reached out to Newman’s insurance company but did not get a response. The outlet did not name the insurer.

Newman provided LGBTQ Nation with a copy of his bill showing a total of $9,116.

“We have to start mass testing everyone for free, tracing and notifying everyone exposed, quarantining them, and giving our healthcare workers the equipment they need immediately,” Newman told LGBTQ Nation. “It’s the only thing that is working in China and South Korea and the United States is not doing it and it is going to kill potentially millions of us.”

Newman, who plays Kingdom member Daniel in The Walking Dead, came out on Twitter in 2017. He followed it up with a video explaining why he decided to come out. The actor credited a young woman at a homeless youth shelter for spurring him to come out of the closet.

Our government refuses to do what's PROVEN to work in China & south Korea to Stop #CORONA! IT'S PROVEN TO WORK & We're not doing it! RETWEET DAILY UNTIL ALL AMERICA SEES THIS🙏🏼 pic.twitter.com/qqNuwqqd57

What the U.S. Census means to LGBTQ people & why you should fill it out. Now.