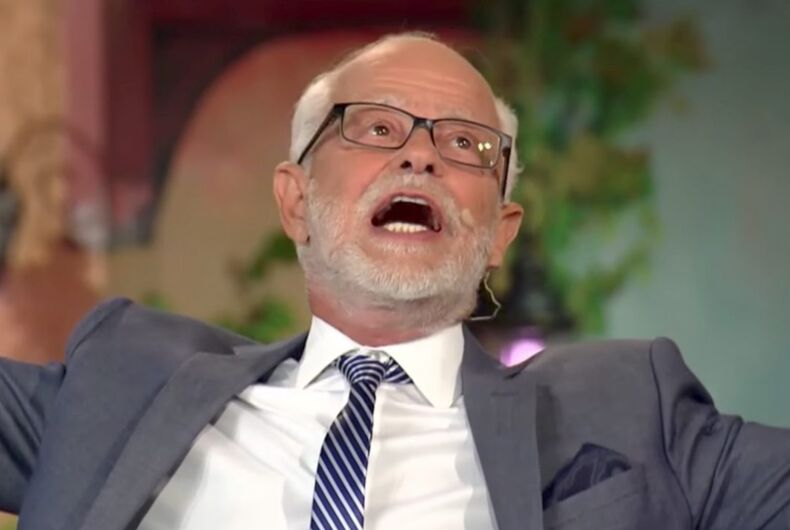 Televangelist Jim Bakker is facing mounting pressure for peddling a fake cure for coronavirus to his gullible followers. His latest grift may result in another round of criminal charges and economic ruin for the huckster preacher.

Bakker, the former head of the PTL Club and developer of a Christian theme park, resigned after being accused of raping an employee and was later convicted of fraud charges as his religious empire crumbled around him in the 1980s.

Bakker spent five years in prison for bilking his followers out of millions of dollars to support a lavish lifestyle. His wife, Tammy Faye Messner, divorced him and became an advocate for LGBTQ rights before her death from cancer.

Bakker, after being released from prison and staging a comeback in televised ministry, went in the opposite direction. He is an ardent supporter of Donald Trump.

And he has been pushing his cure-all “Silver Solution” for at least a year now. Earlier this year, Bakker had “naturopath” Sherrill Sellman on his show to shill for Silver Solution and asked, “This influenza, that is now circling the globe, you’re saying that Silver Solution would be effective?”

“Well, let’s say it hasn’t been tested on this strain of the coronavirus,” Sellman replied, “but it’s been testing on other strains of the coronavirus and has been able to eliminate it within 12 hours. Totally eliminates it. Kills it. Deactivates it. And then it boosts your immune system, so then you can support the recovery.”

The millionaire minister has also claimed his product will cure any sexually transmitted infections.

The New York State Attorney General’s office, the Federal Trade Commission, and the Food and Drug Administration all warned Bakker’s company about promoting the product as a cure for the highly contagious virus. The Missouri Attorney General’s office has filed a lawsuit “for misrepresentations about the effectiveness of ‘Silver Solution’ as a treatment for 2019 novel coronavirus.”

“Certain government agencies have claimed that some statements made by guests on this show could have potentially been interpreted to give the wrong impression about silver solution treating or curing COVID-19,” Bakker said on air to address the controversy.

“While I strongly disagree with the idea that these statements were in context anyway misleading, in response to these government agencies, and after prayerful thought, we have suspended offering silver solutions.”

“My heart is broken,” he continued.

Bakker recently told supporters that they will need to send him checks to buy his products and donate to his ministry because credit card companies had shut off his ability to accept payments.

AT&T recently warned stations that broadcast on their Direct TV service against airing the show, saying they would be held responsible for any other bogus claims the minister made on-air. At least one channel has decided to stop airing the program.

“I’m just sad to see what’s happening to America,” Bakker told viewers recently. “We are living in the final days, and if we go the wrong direction, America is through. You have to use a check [to donate or purchase products]. Your products are going to come to you. Every one of them will come right to your house, and if we can’t, we are going to refund… Don’t let me have to file for bankruptcy.”

“I’ll tell you what, you all may want my head on a platter, and you may get it, but I’ll be gone to Heaven, and you’re not going to win. You’re not going to win because I’m 80 years old, and I don’t need to win. I need to please God, and that’s what I’m going to do the rest of my life.”

The Jim Bakker Show is suggesting that the silver solution it sells can kill the coronavirus within 12 hours. pic.twitter.com/kbUGnUp69m