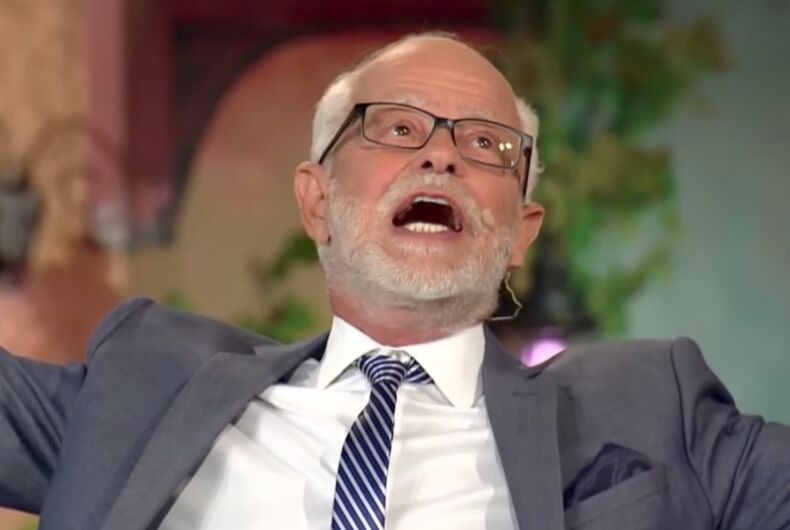 Bakker had “naturopath” Sherrill Sellman on his show on Wednesday, and he asked, “This influenza, that is now circling the globe, you’re saying that Silver Solution would be effective?”

“Totally eliminates it. Kills it. Deactivates it. And then it boosts your immune system, so then you can support the recovery,” she said.

The Jim Bakker Show is suggesting that the silver solution it sells can kill the coronavirus within 12 hours. pic.twitter.com/kbUGnUp69m

For the uninitiated, Silver Solution is a liquid sold on Jim Bakker’s website for $115 (“or more,” if buyers want to simply give him more money) for 64 fluid ounces. His site claims that it uses “catalytic instead of chemical action” to heal people.

The website is also required by California state law to tell people that Silver Solution has chemicals that “cause cancer and birth defects or other reproductive harm.”

Sellman did not explain where any testing ever occurred that proved that Silver Solution could treat coronavirus. Newsweek reports that the government agency that researches alternative medicine, the National Center for Complementary and Integrative Health, said that colloidal silver products like Silver Solution “provide no known health benefits.”

Be that as it may, Bakker has been claiming for at least the last year that Silver Solution cures all STIs. All of them.

This is now the fourth time that Jim Bakker has claimed that the silver solution he is selling "kills every venereal disease that there is." pic.twitter.com/IqHJbFN6R6

Bakker’s guest Sellman sells what she says are naturopathic products on her website. She does not have a degree in medicine, an MD, or a PhD, but she refers to herself with the title “Dr.”

The Wuhan coronavirus has led to panic all over the world and has been connected with over 1300 deaths, mostly in China. The panic for a cure has even led health officials to worry about a possible shortage in HIV medications due to internet rumors that they could cure coronavirus.

In 1987, Jessica Hahn accused Jim Bakker of drugging and raping in a hotel room in 1980 when she was working for him as a church secretary.

“He just believed that everybody should serve him because he was serving God,” she told the Charlotte Observer.

Bakker claimed the encounter was consensual.

In 1989, he was convicted on 24 counts relating to fraud stemming from his business practices. He was sentenced to 45 years in prison and served less than five.