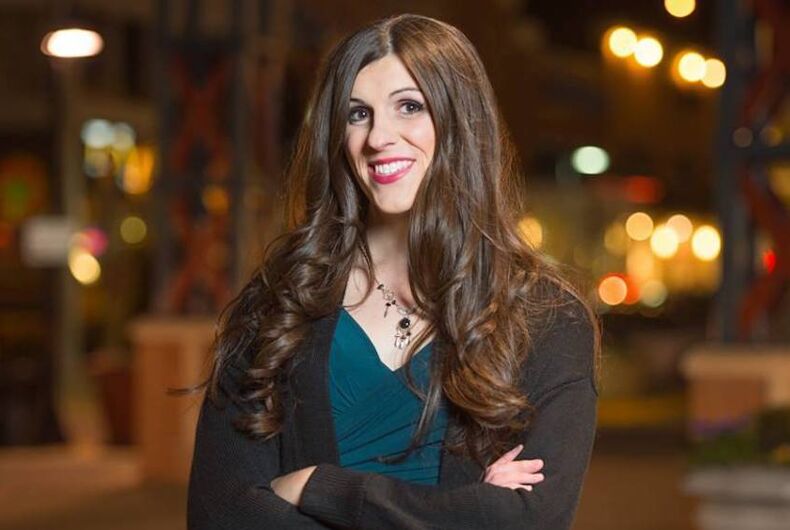 After two years of walking on eggshells, I finally had enough. As a transgender woman in the majority party, I didn’t have to put up with a member from the other side of the aisle trying to make a martyr out of a teacher who lost his job after he refused to acknowledge a transgender boy in his class as the boy who he is, despite his school board’s LGBTQ-inclusive nondiscrimination policy.

“It’s unfortunate that those who demand tolerance the loudest want to push anyone who does not conform,” the delegate said.

I knew that boy. He didn’t need to be villainized yet again.

I pressed the yellow “Request to Speak” button.

“Keep it short,” Del. Mike Mullin instructed me as I grabbed the microphone on my desk, jacking my left elbow behind my shoulder as if to pull a lawnmower cord.

The 2017 election had changed almost everything: with the defeat of the self-described “chief homophobe” of Virginia to the first out-and-seated transgender state legislator in American history, Republican delegates finally stopped introducing explicitly anti-LGBTQ bills.

But still in the minority at 51-49, our pro-LGBTQ equality bills kept dying one after the next.

So after we won the majority in 2019, we could actually pass pro-equality legislation, including the bill we were debating by Del. Levine: HB 1049, to add sexual orientation and gender identity to 70 sections of the Code of Virginia.

We had the votes to pass it. But I wasn’t going to let what I just heard go unanswered.

As one of our two co-whips, Del. Mullin pushed his desk to roll his chair and made a beeline to Majority Leader Charniele Herring to tell the first woman and first African-American to serve as majority leader in the 401-year history of the Virginia House of Delegates, that I would rebut it.

She then leaned over to members on our side of the aisle who had clicked their “Request to Speak” buttons: “Danica’s got it.”

The members turned their lights off.

After 8.5 minutes of the other delegate’s speech, House Speaker Eileen Filler-Corn – the first woman and first Jewish delegate to serve as Speaker of the House – turned to her left.

“The delegate from Prince William,” she said. “Delegate Roem.”

I had spent most of the other delegate’s speech looking at a picture of two transgender teenagers standing at my sides during Equality Virginia’s “Commonwealth Gala” in 2019: Morgan and James.

Morgan was the girl who had been left with a panic attack by herself in a hallway during a lockdown drill when school officials refused to let her enter any locker room.

James was the boy singled out by the teacher being lionized on the House floor.

Both of them had been discriminated against. But when I introduced both of them to a crowd of more than 1,200 people at the Richmond Convention Center ballroom, they received a standing ovation.

On the House floor, I flipped my hair back over my right shoulder and told the stories of both teenagers.

“And if you believe in a deity, then you have to understand that deity made James who he is and made Morgan who she is,” I said.

I could have stopped there but I knew no one else in that chamber knew what it was like to be transgender like Morgan or James… except for me.

“You have no idea what it’s like to be Morgan or what it’s like to be James. You don’t know until you have lived it, until you have cried yourself to sleep over it. No child in the commonwealth of Virginia and no person in the commonwealth of Virginia should ever be afraid to be who they are and be that well and to thrive because of who they are, not despite it and not for what discriminatory politicians tell them they’re supposed to be.”

I breathed and looked down at my microphone to close my speech: “Let’s pass this bill.”

The Democratic members stood for 12 seconds to applaud, just as I had seen for Morgan and James 10 months earlier.

Then we finally voted.

Having LGBTQ elected officials in office matters. On April 2, LGBTQ Victory Institute’s National Out to Win Day is a chance to tell LGBTQ people they are qualified to be an elected leader and to urge them to seriously consider a run, just as I did. While they may not register as a candidate this year or even next, you can be their first ask, and often it will light a spark that only grows with encouragement.

While there are 854 out LGBTQ officials nationwide, we need to elect 22,529 more to achieve equitable representation. We need every one of us to consider a run or inspire others if we are to close this gap.

Representation is power and power is influence. Whether in politics or life, when you have a seat at the table, you set the tone and make the rules. It can be a struggle for your lived experience to be reflected in the majority’s viewpoint but just remember: when you thrive, you make it a little easier for the next Morgan and the next James to thrive too.

Virginia Delegate Danica Roem represents the 13th District of the Virginia House of Delegates as the first out-and-seated transgender state legislator in American history. More information about LGBTQ Victory Institute’s National Out to Win Day is available at outtowin.org