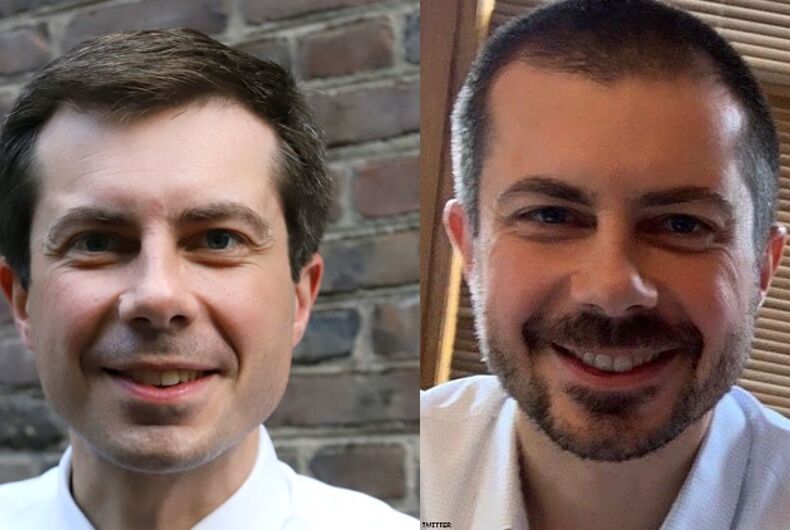 Former Democratic presidential candidate Pete Buttigieg, the first out gay man to win a state primary and have a shot at the nomination, is creating a different kind of buzz this week.

First, as requested by social media, he grew a beard. Now he’s completing the look by buzzing off his hair and he’s got the internet talking about his butch new look.

Related: Will Pete Buttigieg replace Chris Matthews as the host of Hardball?

#BeardedButtigieg and #BeardEdgeEdge dominated gay social media for days and photos of the notoriously uptight candidate circulated around the web earlier this year, but they were altered with an app to add facial hair.

During an Instagram Live broadcast about the coronavirus pandemic with former Vice President Joe Biden and journalist Connie Schultz, Buttigieg came out of quarantine and joked that one major change to his routine was visible.

“Obviously, I’ve taken advantage of the simple fact of not having to shave every day.”

Now, with most of the nation on lockdown and hair salons closed as “nonessential businesses,” people are taking things into their own hands. Enter Buttigieg’s new look courtesy of his husband, Chasten.

During a digital interview with Georgetown University’s Institute of Politics and Public Service, viewers got a peek at the former candidate’s new do and gay Twitter got thirsty.

So @PeteButtigieg shaved his head during quarantine. So there you have it to all your trolling naysayers. He is more than gay enough! #PeteButtigieg #BeardEdgeEdge pic.twitter.com/UlcsnEFqgx

Matter cannot be created or destroyed. Pete Buttigieg is a closed system. Ergo, as the beard grows the rest of his hair gets shorter. #newtonwasright https://t.co/489QLTUw7G

Everyone was reacting to Pete's buzz cut yesterday, but the Buttigieg hair I worry about is Chasten's. I will mourn if Chasten has to resort to the trimmer. 😶

A teacher refused to gender a student properly in his classroom. Then a state delegate spoke up.