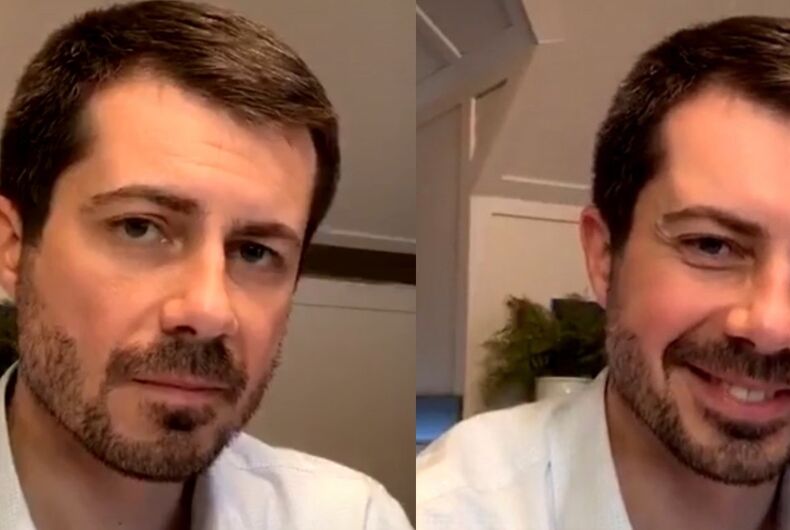 Out former presidential candidate Pete Buttigieg grew a beard after dropping out of the racePhoto: screenshot

#BeardedButtigieg and #BeardEdgeEdge dominated gay social media for days and now the dream has come true: out former Democratic presidential candidate Pete Buttigieg grew a beard after dropping out of the primary race.

Photos of the notoriously uptight candidate circulated around the web earlier this year, but they were altered with the an app to add facial hair. The photos took original photos of Mayor Pete on the campaign trail, deployed overseas, and in casual moments sporting a sexy beard.

Related: John Mulaney would portray Pete Buttigieg in a movie even if it made him a ‘bad Democrat’

But during an Instagram Live broadcast about the pandemic with former Vice President Joe Biden and journalist Connie Schultz, Buttigieg came out of quarantine and joked that one major change to his routine was visible.

“Obviously, I’ve taken advantage of the simple fact of not having to shave every day.”

Now gay men nationwide have been given a present to help them through social distancing. And after weeks of solitude, they are thirsty.

#BeardEdgeEdge has restored my faith in democracy 🙌

Good things of the #StayAtHome #Quarantine
Having virtual conversations with #BeardEdgeEdge
pic.twitter.com/VOlZKmFhXt

Felt like I was watching a leadership summit all day! Thanks to @PeteButtigieg, @Chas10Buttigieg, @JoeBiden, @darakass, & @ConnieSchultz for being leaders in this uncertain time. pic.twitter.com/DjZWqkbQtS