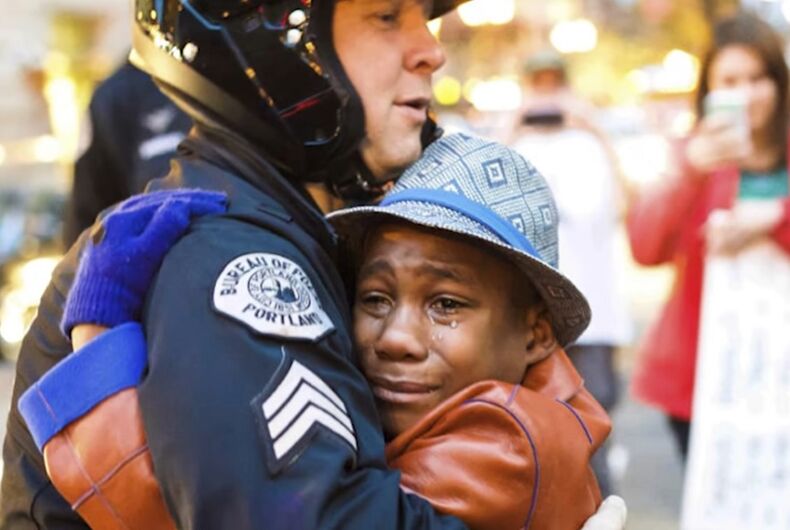 Still of Devonte Hart hugging a cop at a protestPhoto: YouTube screenshot

A new documentary premiered this week about a white lesbian couple who drove off a cliff with their six adopted black children.

In 2018, the Hart family made headlines when a car carrying all eight family members went over a cliff in Mendocino County, California.

Related: The mom who drove her 6 kids off a cliff was drunk & her daughter called her racist

Thread of Deceit: The Hart Family Tragedy from director Rachel Morgan premiered this week on Amazon, and it’s about Sarah and Jennifer Hart and their six kids.

In 2018, the family made headlines when their car went over a cliff into the Pacific Ocean. Their son, Devonte, had previously been in the news when he hugged a white police officer during a protest of the shooting of Michael Brown by police in Ferguson, Missouri.

The family seemed like models of white progressive values to the outside world: lesbian moms homeschooling their six children and attending liberal protests.

But the ensuing investigation found a history of child abuse by the moms. Following accusations of child neglect, they moved from state to state and pulled their kids out of public school, finally landing in a house in Oregon.

The children were repeatedly caught going through the trash to eat and asking neighbors for food. The neighbors called child protective services, but by the time they showed up the family had already left for California.

“The thing that struck me the most” about the tragedy, said Morgan, “aside from it being an absolutely horrific, heartbreaking incident, is how quickly the story was scooped up and spit out in the mainstream and social media with very little compassion and human decency.”

She said that the documentary is a “chance to tell the story without a motive aside from peeling away the layers of something that was unfathomable.”

“It was important for us to go into the documentary unbiased and let the story tell itself in any way that it took form. I felt it crucial to allow the friends who were silenced by harassment to be able to speak their point of view and I felt it was just as important to share the cold hard facts from the investigation and inquest without sugar-coating it.”