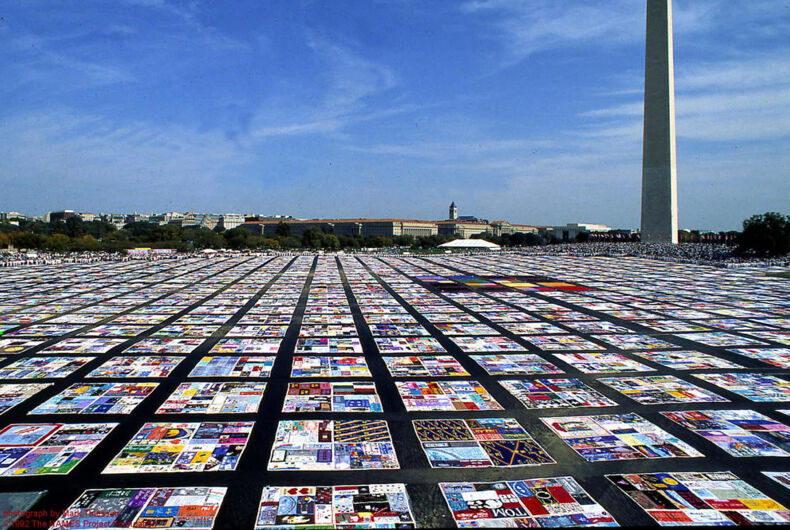 Gert McMullin, who created the first panels for the quilt and is now an employee of the National AIDS Memorial, has fired up her sewing machine to help fight a new viral plague.

Related: Stop comparing the response to coronavirus to the early response to AIDS. It’s insulting.

The AIDS Memorial Quilt was supposed to be making a triumphant return home to San Francisco with the National AIDS Memorial as the new caretaker of the now more than 50,000 panels. Instead, plans for a massive display of the cultural touchstone have been put on hold as COVID-19 pandemic ravages the globe.

“During the AIDS crisis, I could go and do something,” McMullin told People. “But now, I can’t. I’m not used to sitting around and not helping people.”

The masks are being used at facilities run by Bay Area Services. The not-for-profit serves the homeless and people with addiction problems. They’re being distributed to both employees and residents.

The NAMES Project served as the quilt’s caretaker until late last year when it announced it would cease operations and transfer ownership of the quilt and the archives to other institutions.

The Library of Congress will preserve the quilt’s vast archival collections consisting of 200,000 items like “biographical records, correspondence, photographs, tributes, epitaphs, news clippings, and artifacts submitted by panel makers that add context about the lives memorialized on the quilt panels” and also chronicles the making and care of the quilt itself.

In a December 2017 interview with Fresh Air, longtime LGBTQ activist Cleve Jones said he came up with the idea for the quilt on November 27, 1985, during an annual candlelight tribute for assassinated gay politician Harvey Milk and then-Mayor George Moscone.

Struck by the epidemic’s 1000-person death toll, he had attendees write the names of their deceased loved ones on poster boards that they posted onto the front of the building that housed the Health and Human Services West Coast offices for the federal government, then under the Reagan administration which refused to publicly acknowledge the epidemic until four years after it started.

Jones turned to McMullin with his idea because he didn’t know how to sew.