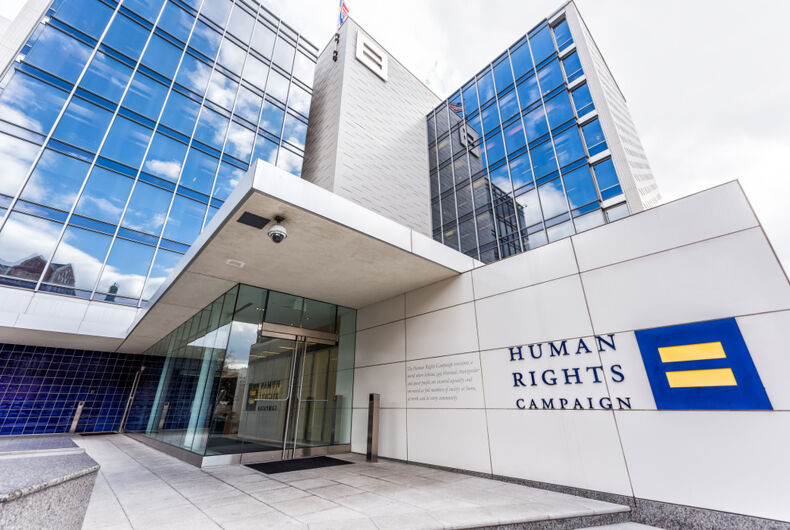 The LGBTQ advocacy organization Human Rights Campaign (HRC) just laid off over 20 employees as they face a drastic drop in fundraising because of coronavirus lockdowns and the ensuing economic collapse. The group currently employs approximately 200 people and says they do not expect further cuts.

The organization’s executive and senior leadership took pay cuts to help steady the group’s finances. HRC is heavily dependent on in-person fundraising events like dinners and receptions, which have been canceled as the pandemic rages.

The Washington Blade reports that HRC will turn three full-time positions into part-time and will not fill two dozen positions currently open. The group will also pause its fellowship program.

“COVID-19 is affecting the nation and no industry or workplace is free from its impact,” interim Communications Director Nick Morrow told the Blade. “For us, the economic reality is that because of the cancellation of events that represent critical funding streams, the decline of our economy, and our ineligibility for any federal funding, we could not make up this shortfall without impossibly difficult decisions.”

“HRC has been in a state of growth for years, and unfortunately, this economic climate forced us to recalibrate our budget and economic forecasts,” Morrow continued. “Despite these challenges, however, our membership and volunteer infrastructure remains strong as we prepare and stay focused on the most consequential election of our lifetimes and on programming that is more critical now than ever.”

The fallout from lockdown orders has been far-reaching inside advocacy organizations. Other organizations reliant on major fundraising events that were canceled and local community centers have been particularly hard hit. Several groups are reportedly on the brink of financial collapse as donations dry up and the economy collapses.

The National LGBTQ Task Force could face lawsuits after hosting a circuit party in Miami as the first states began shutting down large events. At least three attendees have died and dozens have tested positive, but it is impossible to prove exactly when and where a person was infected.

The mayor attended the Task Force’s Winter Party and assured the organization that it would be safe if basic social distancing standards were followed. The group provided hand sanitizer and posted signage at the event where thousands of men from around the world danced closely together for hours.

The sheriff fired her because she’s a lesbian so she ran for his office. She demolished him.