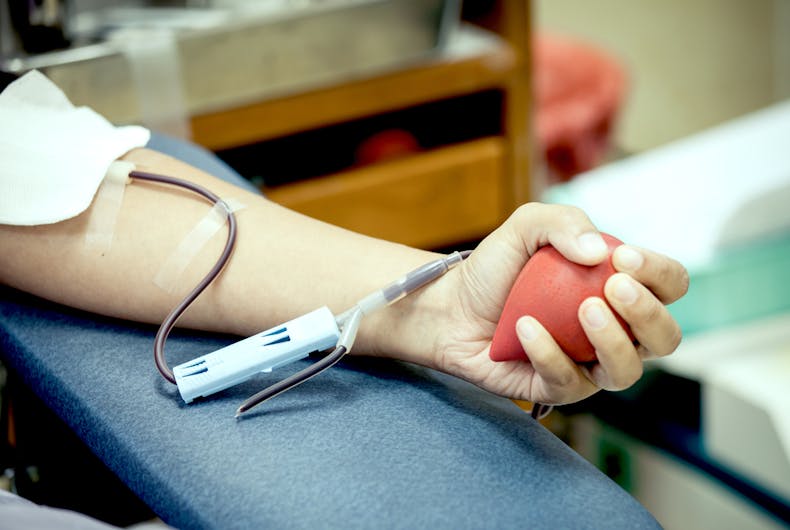 Gay and bi men have been banned from donating blood in the United States since the late 80s. The ban was eased under the Obama administration to allow men who hadn’t had sex with another man for a year to donate.

But while the Food and Drug Administration FDA announced they would loosen the guidelines to lower the deferral period from 12 to three months, gay and bi men who meet the new requirements are still being turned away and blood banks are blaming the Trump administration for pulling a fast one.

In the face of severe blood shortages since many Americans are under stay-at-home orders, blood banks are desperate for donors. Scientists and doctors also specifically want donations from people who have survived COVID-19 so that antibodies for the disease can be harvested from donors’ plasma.

But multiple men nationwide are reporting on social media that they’re being turned away from blood banks.

The nation’s blood centers are also upset. They’re being blamed for the denials, but say their hands are tied until the FDA updates paperwork and computer systems blood banks are required to use.

“[Potential donors] were so angry with us,” Linda Goelzer, a spokesperson for Carter BloodCare in Dallas, said. “People were calling and saying ‘You lied to us, you’re not following the FDA,’ and it’s so unfair. Every blood center in the country has been advocating for these changes, but we have to go through some very rigorous protocols to make these changes so that we can still keep safety in the blood supply and in the process.”

“When the FDA says the word ‘immediately’ that means something totally different in our world,” said Goelzer. “It takes about three months to implement this stuff but [the FDA] is relying on us to communicate that to the public.”

The system automatically rejects anyone who says they had sex with another man in the last 12 months.

“I hadn’t had sex in the past three months so figured I was good to go,” said Brandon Gunther told NBC News. “But the computer rejected my eligibility to donate and I was told ‘you have to remain abstinent from male to male sex for at least one year to be eligible to donate.'”

“Blood donation eligibility should not be determined by methods that are based upon sexual orientation,” the American Red Cross confirms.

Both the Red Cross and America’s Blood Centers – comprising around 800 banks nationwide – told NBC News they are still unable to accept donations.