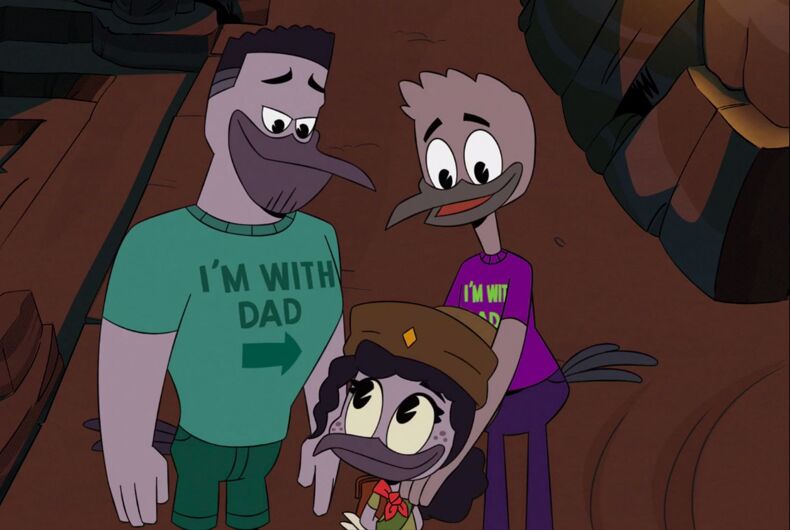 The reboot of DuckTales has introduced a gay couple as recurring characters and fans couldn’t be happier. The two dads are the parents of Huey, Dewey, and Louie’s friend Violet.

In the episode, Violet’s dads adopt her friend Lena. Violet dubs her “my sister from a couple of misters.”

And just in case they weren’t clear, the two characters each wear a t-shirt with “I’m with Dad” written on it. Their names are Tyrian “Ty” Sabrewing and Indigo “Indy” Sabrewing.

“As with all of our characters, we had a lot of conversations about who Violet was and what her background was and came up with this fun notion of her too enthusiastic, overly supportive dads who love being dads,” story editor and co-executive producer Frank Angones said.

“We do have some themes and ideas coming up that address relevant LGBTQ+ narratives. But there’s always an opportunity for a lot more; I don’t want a cop-out and a cookie for saying ‘look at this one thing we did!’”

Fans of the reboot quickly took to Twitter to share their excitement at the increased diversity on the show.

I just noticed that the best gay Disney characters are the ones the media and Disney don’t make a big deal out of.

THAT’S MY SISTER FROM A COUPLE MISTERS pic.twitter.com/4Rr0AAlCwr

We live in the Disney duck renaissance, and I'm so glad for that. The Ducktails reboot is one of the best things they've ever put out!