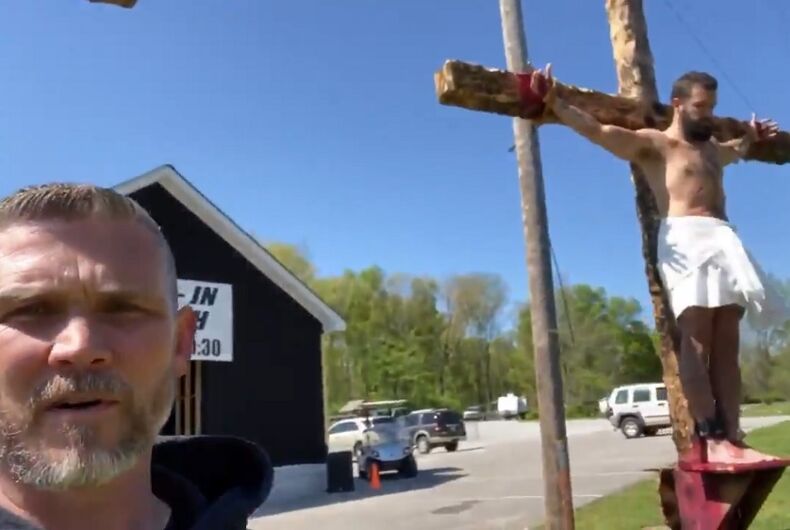 Greg Locke shows off his church's crucifixion reenactment, promising that Easter at his church is focused on the "risen savior," not a "dead Jew and a Palestinian."Photo: Twitter Screenshot

A virulently anti-LGBTQ pastor is defiantly holding church services in the face of the coronavirus pandemic and went so far as to “reenact” the crucifixion this weekend, setting up a cross that his son was put on and dressing up his teen daughter as the Virgin Mary.

Greg Locke of the Global Vision Bible Church in Tennessee has been keeping his church open during the pandemic, saying that church is “an essential service.”

This past Friday was Good Friday, the day when Christians commemorate the crucifixion of Jesus. While it doesn’t traditionally involve reenactments, Locke decided to show that his church is anything but traditional.

His reenactment involved putting his son on a cross, his teen daughter in a white shawl to represent the Virgin Mary, and other men on crosses to represent the Good Thief and the Impenitent Thief who were crucified alongside Jesus. Some church members dressed up as Roman soldiers.

“I don’t serve a dead Jew and a Palestinian to” his congregants, Locke said in the video. Jesus was from Palestine and Jewish, according to Christian mythology. “I serve a risen savior.”

A look at our Live crucifixion scene. IT IS FINISHED. #GoodFriday2020 pic.twitter.com/UFbgtriu4q

On Friday, Locke was still saying that coronavirus was not a pandemic, but “a calculated effort to destroy America with fear.”

We went from a definite 2.2 million deaths, to 100,000 predictive deaths to 60,000 possible deaths and people still believe the media”s garbage coverage of #COVID19. This has never been a pandemic. This has always been a calculated effort to destroy America with fear. #FACT

He has a long history of anti-LGBTQ comments. In this rant, he said that LGBTQ people are “perverted” and want to “cram it down my kids’ throats.”

This #PrideMonth foolishness is getting way out of hand. The LGBTQ are NOT persecuted. It’s openly celebrated and it’s all ONE BIG LIE. pic.twitter.com/vaMv27BzV7

In this Facebook rant, he was really upset that some LGBTQ Christians – who he called “the sodomite crowd infiltrating the church” – have different beliefs than he does.

Posted by On Point with Pastor Greg Locke on Monday, November 19, 2018