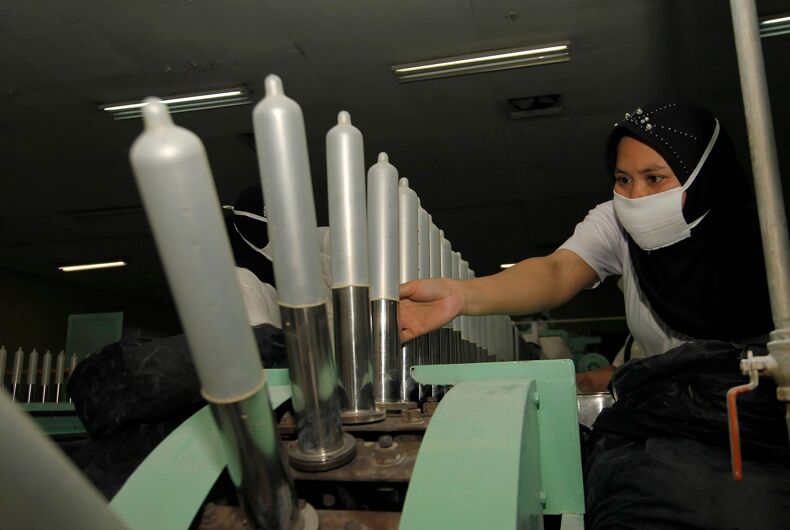 A worker inspects finished condoms at a factory in Bandung, Indonesia.Photo: Shutterstock

Condom factory employees are being sent back to work after manufacturing facilities were shut down worldwide in an effort to stop the rapidly spreading coronavirus.

Now, with a global condom shortage looming, authorities are being forced to confront a potential rise in pregnancies and sexually transmitted infections – and the factory workers have been deemed essential.

Related: FDA approves smaller condoms for American men because regular ones are too big

Most of the world’s condoms are produced in Asia. China, where the pandemic started, shut down their facilities first. Malaysia, India, and Thailand are the other major producers and, while prevention measures have been implemented, most remain closed.

Now Chinese factories and a Malaysian company have restarted production to try to stave off the shortage. Malaysia’s Karex Bhd has been allowed to bring back half of its workforce as essential to the public good.

“It will take time to jump start factories and we will struggle to keep up with demand at half capacity,” Chief Executive Goh Miah Kiat told Reuters.

“We are going to see a global shortage of condoms everywhere, which is going to be scary,” he said. “My concern is that for a lot of humanitarian programs deep down in Africa, the shortage will not just be two weeks or a month. That shortage can run into months.”

“The good thing is that the demand for condoms is still very strong because like it or not, it’s still an essential to have,” Goh added. “Given that at this point in time, people are probably not planning to have children. It’s not the time, with so much uncertainty.”

Karex Bhd manufactures approximately a fifth of the world’s condom supply, including brands like Durex.