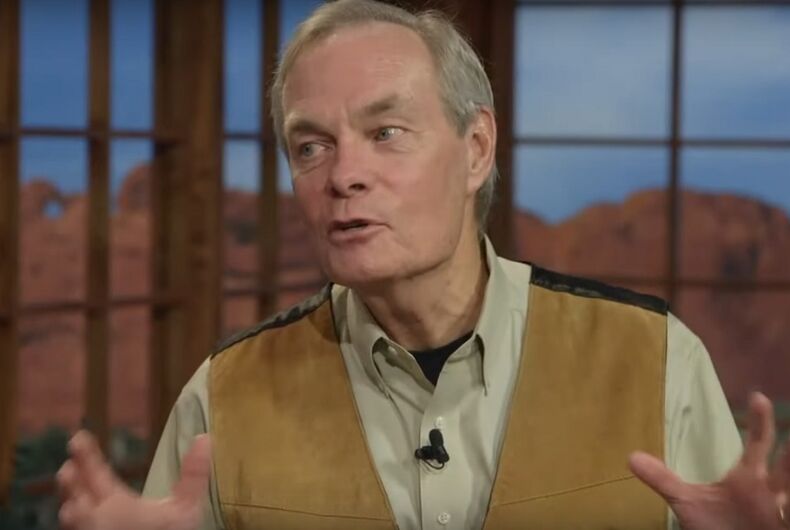 A televangelist who supports conversion therapy and the death penalty for homosexuality said that God will “turn off” receptors in cells that allow in the virus that causes COVID-19… for people who are good enough Christians.

Andrew Wommack is the founder of Andrew Wommack Ministries and Charis Bible College and hosts daily Gospel Truth television and radio shows. He said, “We were promised that no sickness would even come nigh our dwelling” and discussed a reference to “sickness” in the Old Testament.

“I’ve been studying just in the last couple of days, based on all of this, was Exodus 23:25, and that verse says that you shall serve the Lord your God, and He shall take away all sickness- take all sickness away from the midst of thee.”

He said he looked up the words “take away” as they were written in Hebrew and said that they literally translate to “turn off,” which he said referred to “whatever receptors you have in your body that make you receptive to sickness.”

“She just said that when you think fear and negative and stress, there is something in your cells that naturally – it’s like a lock – that keeps radical cells and things from entering in,” Wommack explained. “But when you get toxic thinking, it unlocks those cells and exposes them to these sicknesses that you’d otherwise be immune to.”

“I think that that’s what Exodus 23:25 is talking about. God will lock all those cells. He turns off sickness. You don’t have the ability to get sick.”

For the record, that is not how any of this works. COVID-19 is caused by a virus, not “radical cells.” There is no “lock” on cells that keeps all pathogens out of them. Immunity generally refers to white blood cells destroying viruses and other pathogens, not “receptors” being “turned off.”

While the links between stress and susceptibility to infectious diseases have long been a subject of scientific study, the relationship is much more complicated than an on/off switch manipulated by “toxic thinking.”

Earlier this year, Wommack had Minnesota Senate Majority Leader Paul Gazelka (R) on his show to discuss how Republicans killed a ban on conversion therapy in that state.

“What they call political correctness is nothing but demonic inspired,” he said.

Wommack also once claimed that he saw two babies raised from the dead after he and others prayed for them.

Earlier in his show, the televangelist said that he would be following social distancing guidelines during the epidemic.