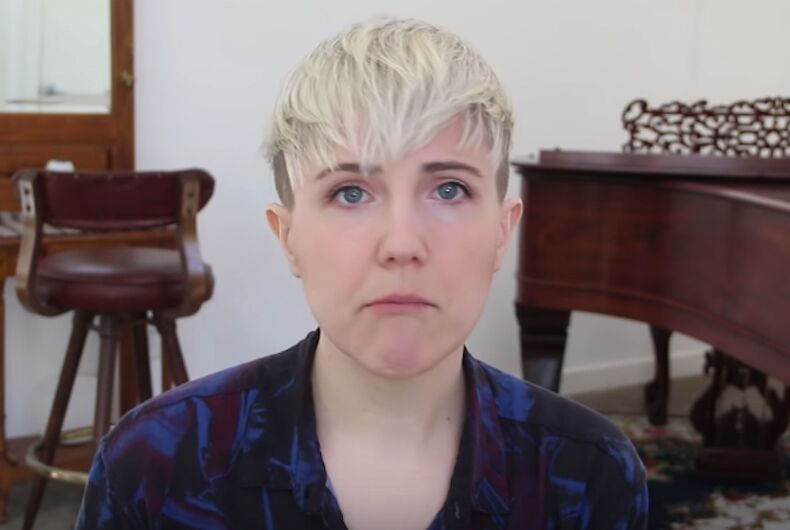 A 33-year-old YouTuber named Hannah Hart recently released an emotional video explaining that her father won’t attend her springtime wedding to her female partner, Ella Mielniczenko, because he is a Jehovah’s Witness, an ultra-conservative and anti-gay sect of Christianity.

In the video, Hart says that she refrained from publicly criticizing her father’s religion for a long time, even though she was raised in the same faith, because her father and stepmother threatened to cut her out of their lives entirely if she ever did.

“It’s taken me six months to decide I am comfortable with that,” she said.

Near the beginning of the video, Hart (who has 2.43 million YouTube subscribers), says, “I just need to say this so that I don’t internalize it and it doesn’t fester in me…. I am hurting about this a lot right now. It is really devastating to me. It has really hurt me.”

She says the Witnesses aren’t like a church or a Christian denomination, but are more like a cult.

“They are more like the kind of organization that consumes your entire life and controls all your relationships,” she says.

Her father sees her marriage as an attack on him and his religion, she says “that’s not what it is. I’m just getting married.” After saying this, she breaks down in tears again.

She later says that her father not attending her wedding is neither her choice nor her fault because “that’s not what I signed up for when I was born.” She also claims she’s “fine with it,” adding, “It sucks. It feels pretty bad… [but] why would you want someone at your wedding who doesn’t believe in you or your love?”

She mentions that her stepmother won’t even make eye contact with Mielniczenko.

“I wanna tell anyone who’s watching who has a parent that doesn’t choose you, I want you to know that you are still worthy of so much. And just because they are rejecting the moments of joy in your life and these moments to celebrate and to share, doesn’t mean you have to live your life rejecting them.”

On the verge of tears, she admits, “There’s nothing I want more than a relationship with my dad, but I can’t pretend his choices are something that I respect.”

Near the end of her video, she tells viewers that if they want to learn more about Jehovah’s Witnesses, they can watch a 2020 documentary called The Witnessses. The documentary explores the sect’s widespread cover-up of child sex abuse. She also directs followers to JWfacts.com, a site that lists the sect’s other abuses and beliefs alongside advice for those seeking to leave it.

Dallas will soon have the most rainbow crosswalks in the country