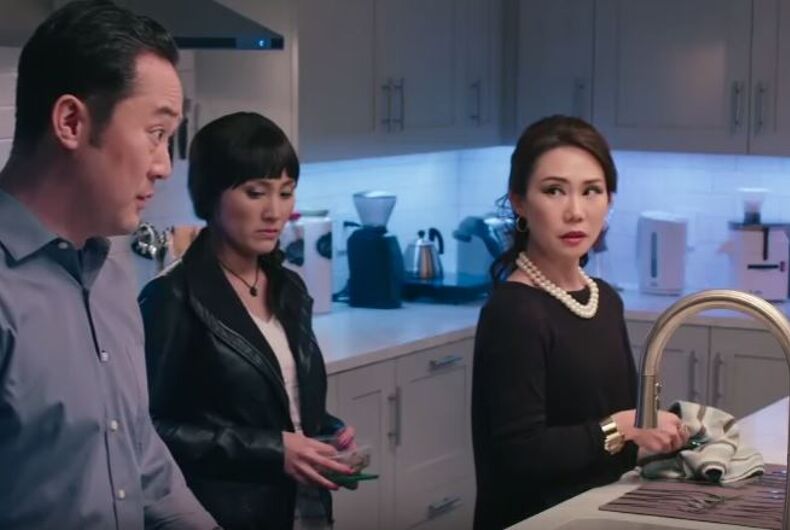 A Jehovah's Witness family doesn't take the news of lesbian moms too well in "Remember the Wife of Lot."Photo: YouTube Screenshot

The Jehovah’s Witnesses are holding their annual convention this summer across the globe, reaching millions, and as part of the programming attendees will watch a film the church has produced, called Remember the Wife of Lot.

The poorly acted instructional film, whose name comes from the Biblical story of Lot’s wife being turned to a pillar of salt for looking back at Sodom in defiance of angelic orders, tells attendees how to live their lives through the story of a family facing a struggle between financial gains and religious adherence.

As Patheos points out, this is not a surprising message for the church to be pushing, since most Jehovah’s Witnesses make under $50,000 a year, and the church disavows higher education, with 63 percent having no more than a high school degree.

Remember the Wife of Lot also includes an explicitly antigay message during a conversation between the parents, their daughter, and her friends, one of whom reveals she has lesbian parents.

“My moms are both really proud of me,” the friend says. “I was raised by two wonderful women. You know, life partners?”

“You know, my assistant, Marty, I recently found out that he’s gay,” she continues, practically whispering.

When the friend notices that she sounds as if she isn’t okay with that fact, the father pipes up to say that they live by “the Bible’s moral standards.”

“But we don’t force our beliefs on other people, and we don’t judge anyone, either,” he adds, before adding that sex is only to be between a man and woman who are married to each other.

So you’re in trouble too, unmarried, fornicating heteros. Get it together.

“Honey, maybe we’re being too harsh on gays,” the mother concedes. “Some people just seem to be programmed that way.”

“Look, I know not everyone agrees with us, but we all have free will, and God lets us choose to live by his standards or not,” the father responds. “If we go against his standards, we end up hurting ourselves. He just wants what’s best for us.”

You can watch the film below, in three parts.

This is not the first time the church has put out antigay media, either.

Last year, the Jehovah’s Witnesses released a video teaching children how to talk to the children of gay parents. Spoiler: Not well.