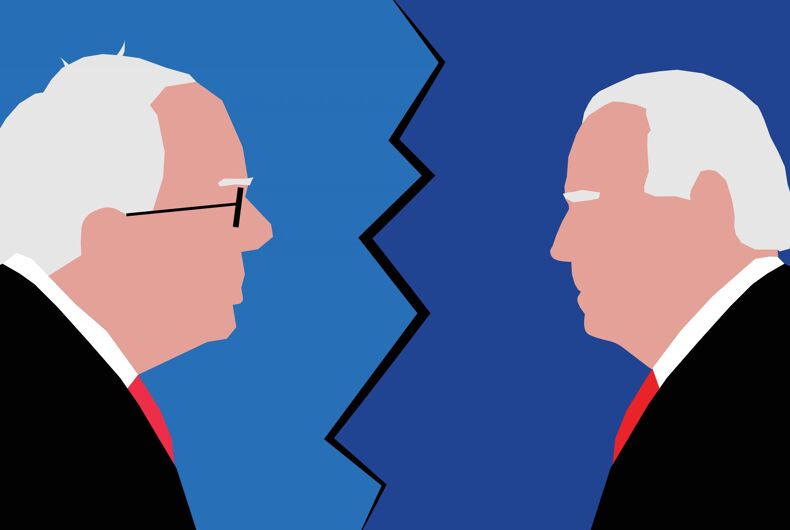 For our 2020 election coverage, we’ve assembled the LGBTQ Nation Election Council, a group of queer leaders, activists, journalists, and topic experts, to provide analysis on this critical election from diverse perspectives.

We asked our panel of election analysts who they were supporting after the Super Tuesday election and the resultant candidate shakeup. The responses reflected the larger Democratic voter base; many members of the council supported Sen. Bernie Sanders (I-VT) policies, but several feared he wouldn’t win the election and were backing former Vice President Joe Biden instead.

Related: Trump calls for Buttigieg & Klobuchar to be “impeached” over Biden endorsements

With Sen. Elizabeth Warren (D-MA) out of the Democratic presidential primary race, the field has narrowed to Biden, the moderate candidate, and progressive champion Sanders. Rep. Tulsi Gabbard (D-HI) also remains, but isn’t a viable candidate.

Out candidate Pete Buttigieg, Sen. Amy Klobuchar (D-MN), and billionaires Tom Steyer and Michael Bloomberg also called it quits after Biden racked up a huge string of overwhelming victories in South Carolina and Super Tuesday states. Steyer did not endorse a candidate after he withdrew, but the other three moderate candidates have all endorsed Biden.

While Biden may have faltered in the early voting states, his support from people of color, moderates, and older voters allowed him to pick up 11 wins in two days. Biden, firmly ensconced as the centrist candidate, now leads in the delegate count.

LGBTQ voters turned out in record numbers and broke in favor of Sanders in Super Tuesday voting, but has Biden’s successes changed minds? Are Sanders progressive positions most important or is electability the bigger issue?

Keshav Kant, a neuroscience specialist at the University of Toronto, said she switched from former candidate Julian Castro to Sanders.

“I’d originally supported Castro given his proactiveness about discussing subjects concerning marginalized people and involving said people in the conversation,” Kant says. “Now, given the initial primary results, I’m supporting Bernie Sanders given his progressive politics. My support is mostly based on my hope that if he does get elected he can move America into a more left-leaning and equitable direction.”

Former Editor-In-Chief of The Advocate, Jon Barrett, has switched from supporting Michael Bloomberg to Joe Biden.

“I’m supporting Biden because I believe he’s best positioned to beat Trump,” he said. “That is my top priority.”

Even Rich Tafel, the founder of the Log Cabin Republicans, says he’ll be voting for Biden. Tafel led the group for a decade – long before the group’s hard turn toward Trump-style politics in the past few years.

“Unlike my party in 2016, the Democrats were smart enough to try to coalesce around a uniting candidate instead of moving forward with an extreme candidate. I’m amazed at the speed that Mayor Pete and Sen. Amy endorsed Biden,” Tafel said.

“I love how this all runs against conventional wisdom about the importance of big spending, being charismatic and the power of old fashioned endorsements. It’s unpredictable.”

“The idea of a Bernie vs. Trump race assures a Trump victory, so Biden is the best hope for beating Trump,” Tafel added. “He’ll need to be able to string a sentence together, but there’s a chance his gaffes, which are well known, could endear him in contrast to Trump.”

Gabrielle Alexa, a writer from New York, says she hasn’t wavered in her support for Sanders – even if Biden might be seen as more electable.

“Bernie Sanders definitely shares a lot of my political beliefs — he is the only candidate who wants to restore voting rights to incarcerated individuals and the only candidate who is in support of abolishing ICE,” she said. “While Biden may stand a chance against Trump, his desire to return the country to the Obama era is not enough for this country.”

“After Super Tuesday, only two candidates have a viable path to the nomination and I chose the one I think has the best chance of beating Trump and helping down-ballot candidates get elected,” Jerame Davis, Executive Director of Pride At Work, explained. The organization represents LGBTQ working people’s interests within the labor movement.

“2020 is not important just because of Trump – Democrats need to take the Senate and keep the House. And with 2020 also being a Census year, we need as many statehouses to be in Democratic control as possible to undo the massive gerrymandering that has taken place over the last 10 years.”

Davis switched his support from Warren to Biden.

Steven Wakabayashi, a second-generation Japanese-Taiwanese-American from New York City, articulated the back and forth many LGBTQ people are having with themselves as they choose who to support. Wakabayashi hosts the weekly podcast Yellow Glitter.

“I was supporting Warren and Sanders due to their stance on healthcare, which I think is one of the most important issues we are facing right now, especially during a viral outbreak,” he said. “My vote landed with the one that could use the vote the most.”

“With that said, the candidate most likely to beat Trump would be the ones to sway conservative voters, which would be Joe Biden.”

Indianapolis City-County Councilor Zach Adamson hasn’t made up his mind. Adamson had previously endorsed Buttigieg, a fellow gay Hoosier, in the primary.

“I’m leaning Biden, but still like Sanders,” Adamson said. “Underdogs can come from behind.”