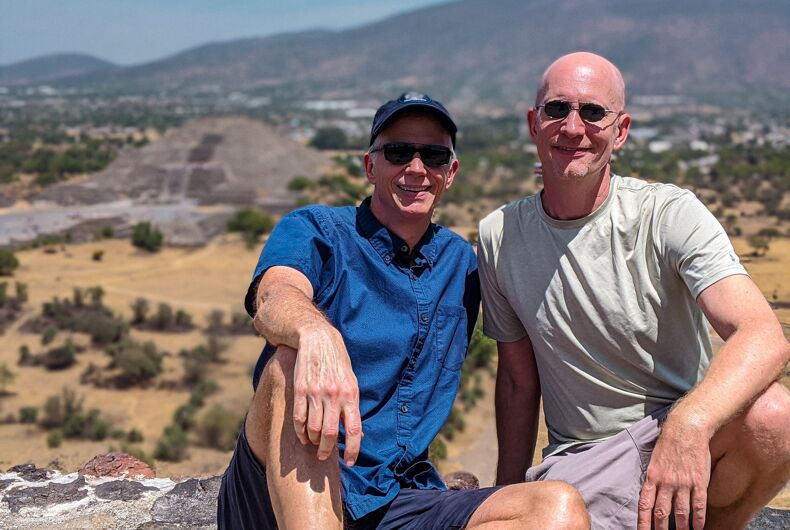 Just a few weeks ago, our plans included visits to rural Mexico and then Portugal for two months.Photo: Michael Jensen

Like everyone, life has thrown us both a few curveballs over the years.

Related: We’re a gay couple that travels the world. Here’s what that’s taught us about coronavirus.

But our lives have never changed so dramatically as they have over the past ten days.

It’s probably the same for most of you reading this column.

Two weeks ago, we were in Mexico City, the tenth country we’ve lived in since we left Seattle three years ago to become “digital nomads.”

The world seemed wide open, and we were growing more intrepid by the month. We had a long list of countries where we wanted to visit next, including far-flung places we wouldn’t have even considered three years earlier.

Instead, today we’re living in a suburb of Austin, Texas, in the kind of development where the sidewalks abruptly end and there’s a SUV in every driveway.

A friend’s parents owned an empty house here, and it seemed like the perfect place for us to hole up for a few weeks, or months, or however long this pandemic lasts. We’re paying a modest amount in rent.

But it’s exactly the kind of cookie-cutter place we left the U.S. to escape.

To say this is the last spot we expected to be at this moment in time would be an understatement. Two weeks ago, we would have said we were more likely to end up living in Indonesian village than suburban Texas.

Which definitely is not a complaint. We know we’re incredibly lucky. The house is large and comfortable. The bathroom in the master suite is bigger than some of our previous international apartments.

That said, like most people, we almost never go outside and we see almost no one else in real life. We’re practicing social distancing, and even disinfecting the mail. We’re taking this disease very seriously. And we’re accepting that we might be living this way for many months.

Even so, in a matter of weeks, we’ve gone from being digital nomads with the entire planet stretched out before us… to our world shrinking down to our house, the yard, and, when we’re feeling particularly stir-crazy, the surrounding suburban streets.

It’s pretty disorienting. And we know most people are probably feeling the exact same way. The details might be different, but the end result is the same.

Our old lives changed overnight, and we know they’re not coming back for a long time.

So the question we all have to face now is how do we handle this change in our circumstances? Do we view it solely as a disaster? An unfair turn of events that wrecked our hopes and plans?

Or do we at least try to view it differently? Maybe even see it as an opportunity?

We’re trying to do the latter, though we’re not pretending things aren’t bad.

Unfortunately, we’ve spent the past five months working on our travel memoir and building up our travel blog.

Right now it’s hard to imagine either our memoir or blog going anywhere in the near future. We think we have a pretty interesting story to tell, but we’re not sure anyone is going to be interested in reading it any time soon.

But it is what it is.

And so many people have things so much worse.

Instead, we’re using this time to go back to focus on the things we can control. We’re trying hard to adapt to the changing times.

We both have books that we haven’t finished or that haven’t been published for one reason or another.

We’ve gone back to working on those and will probably end up self-publishing them.

Michael’s going to continue to build our Instagram following, something he’s he very much enjoyed. Turns out it’s another great way to meet people from around the world.

Brent is working on a screenplay idea that Michael thinks is downright genius. It’s a comedy — a dark comedy but a comedy — and we both think that people are going to be looking to laugh before this thing is all over.

We’ve also started doing yoga and have adapted our fitness routine so we don’t have to go to the gym.

We’re calling and Skyping with our friends back in Seattle and all around the world. Sometimes we think we’re talking to people even more than we did before the pandemic.

We’re working our way through our huge list of books on our Kindles and watching TV shows we meant to watch before.

No, right now we’re not living the life we’d planned. Brent and Michael won’t be going to any new places for a while.

But life goes on, and we’re trying to make the best of it. Because whether or not it’s the life we wanted, it’s now the one we have.

As we said in our last column, we’re all in this pandemic together, and the only way we’re going to get through it is by making connections and supporting each other through these grim times.

So tell us how you’re surviving, and the techniques you’re using to get by, either in the comments below or by messaging us through social media.