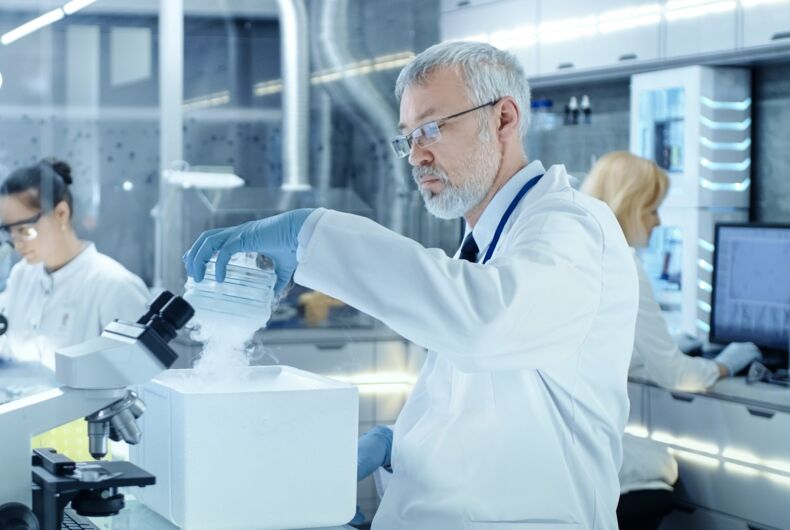 The Trump administration’s decision to ban scientific research that uses human fetal cells has not only had a major impact on a potential cure for HIV, now it’s hampering the search for a vaccine for COVID-19.

Evangelical Christian activists, who overwhelmingly support Donald Trump and oppose abortion, pushed the administration to ban the research. Now one group is attacking a potential vaccine for the novel coronavirus and claiming further research would be “morally” irresponsible.

Related: A House Republican introduced a bill to protect gay fetuses. Then he quit.

“It is deplorable that anyone would want to exploit the remains of aborted babies for financial profit especially when so many people will refuse to use those products because of their deeply held religious, moral, and pro-life convictions?” Debi Vinnedge, Executive Director of Children of God for Life, asked.

In 2018, a scientist who was supposed to supply mice that have been modified with human fetal tissue for an HIV study emailed researchers that the Department of Health and Human Services (HHS) “has directed me to discontinue procuring fetal tissue.”

Researchers use fetal tissue donated by women who have had legal abortions to create “humanized” mice that have immune systems that behave like a human’s. They have played a major role in developing treatments for HIV/AIDS.

The same humanized mice could be used to test three potential treatments for the coronavirus being developed in a government laboratory.

The mice are transplanted with fetal tissue that develops into lungs. This allows the “humanized mice” to be infected with the coronavirus; mice are naturally immune. The virus attacks the human respiratory system.

Scientists have requested an exception to the ban to study the mice, which have been offered for donation by other researchers, but so far it has not been granted. Insiders say political influence by the religious right is the reason.

“That accusation is laughable at best and nothing more than a political maneuver. In fact, we have morally produced treatments for patients who are already infected,” Vinnedge claimed. “And there are more promising treatments on the way to prevent infection entirely. President Trump has done a great job of promoting morally responsible research ensuring that all Americans can have the protection they need.”

The group singled out the work of one company working on a potential cure as unacceptable while touting a different lab’s effort that they say uses DNA from insects instead of humans.

No cure or vaccine for the new coronavirus exists. Almost 500,000 people are known to have been infected across the globe. At least 22,000 have died.

We’ve lived all over the world as a gay couple. Now we’re holed up in suburban Texas.