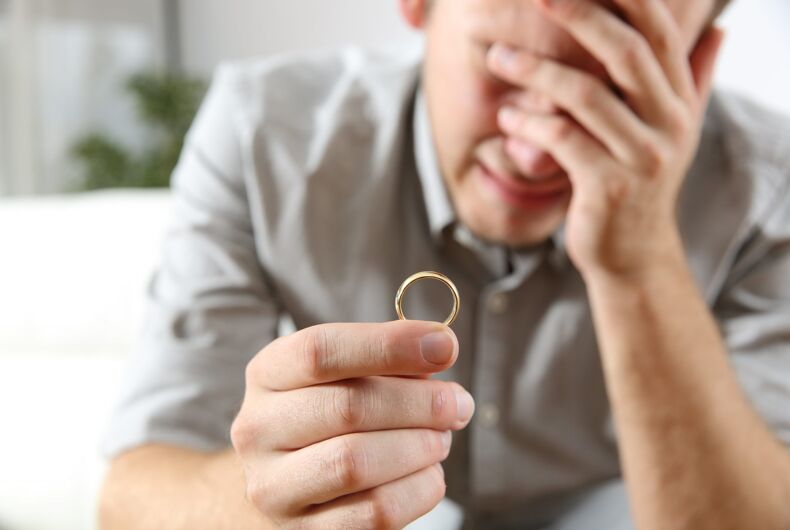 UPDATE: Hillier has written to LGBTQ Nation to confess that large parts of his story aren’t true.

“I no longer live in Brazil, Octavio broke up with me,” he wrote. “We were in a relationship, he is a doctor. But we were open so not technically cheating.”

“I was just bitter that he was quarantined with someone we had only known a couple of weeks, 2 weeks before our marriage. While I was alone in a foreign country with no company other than a dog. Shit got out of hand… But didn’t care at the time as I was mad.”

Hillier also admitted that he had emailed the Daily Mail to admit, “I lied.”

Related: This gay couple’s mindblowing first dance at their wedding shocked their guests

Matt Hillier has put his wedding plans on hold after discovering his fiancé was sleeping with another man. Two weeks before the ceremony, his would-be husband was put in quarantine after coming down with the symptoms of coronavirus infection.

Hillier had moved from England to Brazil to marry Octavio Santos and didn’t find out until Santos confessed – because the other man was quarantined with him in the same apartment.

“I am angry and bitter,” Hillier told the British tabloid The Daily Mail. “He is a cheat and this is a total slap in the face. I’ve moved to the other side of the world to start a life with this man. I’ve spent so much time stressing over organizing our wedding so that it’s perfect.”

“I even flew my parents and sister out in February to hear the reading of our wedding banns and I’ve got everything ready for our ceremony at the beginning of April.”

The other man, identified as Nathan, is a mutual friend. The three had plans to travel to Rio for the weekend when the AirBnB told them they couldn’t bring Santos’ dog.

“I offered to stay in the apartment to look after the dog so that Octavio could have a good time. Nathan was a friend who we’d had a few drinks with on the odd occasion,” Hillier said. “I’ve been with Octavio for five years and thought I could trust him and I mistakenly thought Nathan and I were friends. I spoke to Octavio while they were away and was expecting them home when Octavio called.”

Hillier said Santos told him he wasn’t feeling well and had a high fever. Hillier told him to go to the hospital immediately.

But then came the bad news, Santos was forced to tell the truth because he was being quarantined in Nathan’s apartment with him until they were both well again.

“I am beyond furious,” said Matt. “He is due out of quarantine the day before our wedding.”

“I can’t believe he cheated on me with this guy during their weekend away and now they are both quarantined together. I can’t even call him to chat properly to see if we can sort this out because Nathan is in the room next to him.”

“For now the wedding is postponed and I don’t know what the future holds,” he said. “I just want to see him in person and talk. I’m still too angry to think straight right now.”

“He is now being really apologetic and says he wishes we could go back to it just being me and him. But I don’t know if I can forgive him. The whole world has been affected by coronavirus and so I have I – but not in the way I thought.”

Brazil currently has almost 2300 confirmed coronavirus cases and 47 people have died so far.

We’ve lived all over the world as a gay couple. Now we’re holed up in suburban Texas.