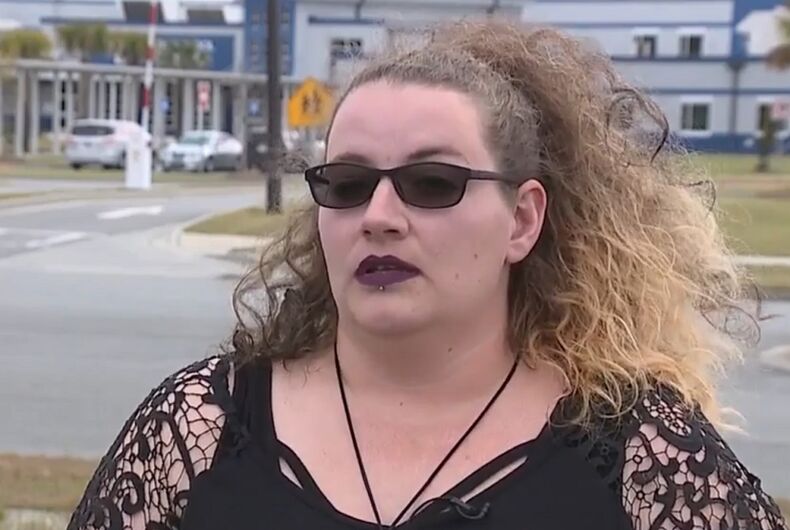 Charissa Mehojah, the mother of the teen who was kicked out of the dance.Photo: Screenshot/WJCL

A mother is up in arms after a school counselor in Georgia removed her 13-year-old transgender daughter from a school dance, accusing her of wearing a “costume” because she wore girls’ clothes.

Charissa Mehojah told WJCL News that her daughter went to a Valentine’s Day dance at Rice Creek School in Port Wentworth wearing a black blouse, eye shadow, black slacks, and a rose in her hair.

“This was the first time she was able to express who she is inside, in a public setting,” Mejohah said, adding that her daughter was wearing a “nice outfit.”

“Honestly, she was going to go in a dress, but she chose not to just in case it was going to be a problem,” the mother said.

The counselor removed her from the dance, despite the fact that her clothes were in accordance with the school dress code, and pulled her into the school library “crying and upset.”

“I was furious. I was livid,” said Mehojah.

“Instead of apologizing and correcting the behavior,” Mehojah said. “They asked for medical proof that my daughter is transgender.”

The principal apologized to her daughter in person, but Mehojah said no one from the school has contacted her.

Following the incident, the Savannah-Chatham County Public School System released a statement that said, “SCCPSS supports and respects the rights of all students and does not discriminate based on the individual’s race, color, religion, or sexual orientation. We encourage students to build communities of inclusion and acceptance at their respective schools in accordance with district policy.”

While the statement said that students are required to follow “dress code requirements at school and during school sponsored activities” in order to preserve “an orderly environment,” the school’s dress code does not ban students of any gender identity from wearing what Mehojah’s daughter wore to the dance.

The district denies that school officials asked for “medical proof” that Mehojah’s daughter is transgender.