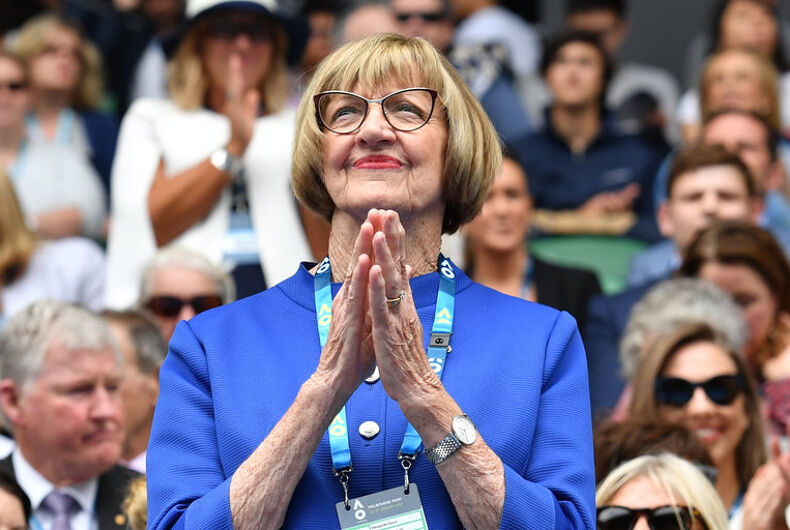 Margaret Court was one of the brightest stars to ever play in women’s tennis. She won more Grand Slam tournaments than any other player, man or woman, during her career ranging from 1960 to 1977.

She then retired and converted to Pentecostalism and became a minister in 1983. The Australian athlete then created a church in Perth, Australia in 1995, where she has consistently preached against same-sex marriage and used anti-LGBTQ rhetoric.

Related: Here are the events that are canceled, postponed, or still happening during the coronavirus outbreak

In the wake of the coronavirus pandemic, many churches and places of worship around the world have closed – but Court’s church, the Victory Life Centre, has refused to.

The church’s leadership is “in agreement that this COVID-19 will not come near our dwelling or our church family,” they wrote in an announcement featured on the church’s website.

“We are praying daily for for you, knowing that we are all protected by the Blood of Jesus. For your convenience, hand sanitizer readily available at all our sites,” they continue. “Our desire is for you to be informed and know that our heart is to protect and ensure the safety of all so we can continue to worship together, all our service will operate as per normal.”

The announcement concludes with a quoting of Psalm 91:9-10, which in part reads “no evil shall befall you, nor shall any plague come near your dwelling.”

Asking congregants to still participate in church activities “as per normal” could pose a huge risk for spreading of the coronavirus, as most public health officials recommend social distancing to prevent exposure to the virus – but Court’s church will allow the opposite.

Court’s anti-LGBTQ history spans nearly three decades now and includes claims that LGBTQ people are “after our young ones…that’s what Hitler did…that’s what communism did. Get in the minds of the children.” She also has claimed that trans kids are possessed by Satan, that same-sex marriage in Australia will create a generation of “genderless children” and lead to Christmas or Easter ending.

She also launched a campaign against Qantas Airlines, Australia’s flag carrier airline, over the company’s support of same-sex marriage in 2017, although it became law in the country in 2012.

In 1990, Court famously derided the then-generation of tennis stars, including Martina Navratilova, for ruining the sport by being out – “It’s very sad for children to be exposed to homosexuality,” she claimed. She also supported South Africa’s apartheid policies and promoted them as “better organised than any other country, particularly America.”

Court’s name currently graces the main facilities of the Australia Open, where she earned 11 of her 24 championships, but calls for her name to be removed have ramped up in recent years, even garnering outspoken support from Vogue editor-in-chief Anna Wintour. Court has called this a conspiracy against her.