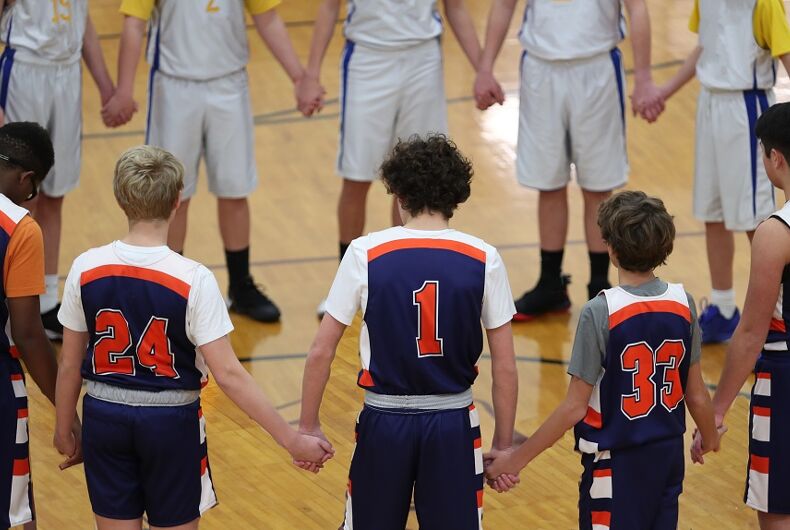 Teens hold hands in prayer before a basketball gamePhoto: Shutterstock

In a lawsuit filed earlier this month, two mothers in Tennessee allege that their son’s middle school basketball coach forced kids to attend his sermons in order to stay on the team.

The lawsuit, filed by the mothers who identified themselves only as “K.K.” and “K.K.,” says that their son signed up for the school’s basketball team, but no one told him that he would have to participate in any religious instruction to be on the team.

But Coach Chuck Comer then allegedly told the students that participating in a “Teens for Christ” program was a requirement for the team. Specifically, students had to show up 30 minutes before practice in the morning on Tuesdays and Thursdays to listen to Comer “read from and interpret the Bible for approximately 30 minutes.”

Even worse, the son went to one of the sermons, which was allegedly about LGBTQ people and “sin.” The teen was forced to endure “harassment on the basis of his parents’ sexual orientation” to be on the team, the lawsuit states.

The mothers say that they have evidence that the school’s administration knew Coach Comer was making students participate in the Teens for Christ program and did nothing to stop him in the last eight years he’s been doing this.

The lawsuit asks for $1 million in damages for the violation of First Amendment rights and $10 million in punitive damages to force the school district to change its policies.

A Knox County Schools spokesperson told Knox News that participating in Teens for Christ is not a requirement for the basketball team but refused to comment on the pending litigation.