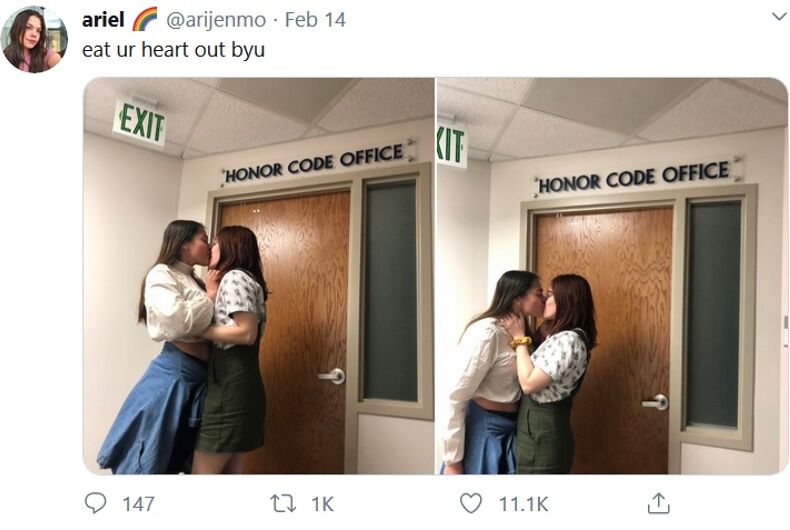 A student tweeted pictures of her kissing another woman at BYU.Photo: Screenshot/Twitter

Students at the Mormon-affiliated Brigham Young University in Utah say that the school tricked them into coming out by erasing “homosexual behavior” from its honor code and then bringing back the policy several weeks later.

Now they’re afraid of the consequences of coming out in an unsafe environment.

The honor code said that “homosexual behavior” isn’t just sex, but “all forms of physical intimacy that give expression to homosexual feelings.”

While it’s not exactly surprising that a school affiliated with the Church of Jesus Christ of Latter-Day Saints – which gave tens of millions of dollars to the fight against marriage equality in California in 2008 and considers homosexuality a “serious transgression” – would have a policy that bans out LGBTQ students, the school removed the policy from its honor code in February.

Students celebrated, many with kisses, before the school said that there was “some miscommunication.”

And, earlier this week, a letter from Commissioner of the Church Educational System Paul Johnson said that homosexuality is “not compatible” with the school’s rules because “same-sex romantic behavior cannot lead to eternal marriage.”

Today this letter from Elder Paul V. Johnson, Commissioner of the Church Educational System, regarding the updated Honor Code was sent to students and employees at all CES schools. pic.twitter.com/sADljd8lQT

Students protested yesterday afternoon at the university. One held a sign that read “Jesus said love everyone” and others chanted “The Honor Code is honor-less.”

Some students held hands with other students of the same sex, while others had Bible quotations written on them in marker.

Others chanted “Let all students date.”

BYU students chanting “Let all students date!” We love to see it 🏳️‍🌈 Happy to see so many allies supporting our LGBTQ+ brothers and sisters pic.twitter.com/cQUqHzNuIE

“We felt like we finally had a place and then they ripped it away again,” junior Katie Guerrero, who is bisexual, told the Salt Lake City Tribune.

But some students have gone further and accused BYU of tricking them into coming out.

Student Lilly Bitter, who kissed her girlfriend in public as part of the celebrations for removing “homosexual behavior” from the honor code, said that she doesn’t feel “safe” at the school anymore.

“There’s pictures of me on the news, kissing a girl in front of the Brigham Young statue. People who didn’t know before know now because I thought it didn’t matter,” she said. “It’s so much more scrutiny, and I feel like I’m not safe here anymore. I have kind of blown my cover as an LGBT student.”

“I thought BYU cared about me,” said student Tiauna Lomax, who came out as bisexual when the honor code was changed last month. She said she now feels “traumatic whiplash” and may transfer to another school.

Student Danny Dawson, who is gay, said, “I was telling [a therapist] how I’m very happy now to be at BYU and to know that I can be myself and talk to people about dating and not have fear of being suspended. I didn’t realize how much that had been looming over me until it was gone.”

“I read [the letter from Johnson] and said, ‘Please tell me this isn’t saying what I think it is.'”

Other students said they feel “stupid” that they believed the honor code change meant that the school would at least be tolerant of LGBTQ people.

No one is sure of what disciplinary action the school will take against students who came out. Others aren’t sure what their classmates will do and if the school will protect them.

Senior Ciera Galbraith, who came out as bisexual, said: “Everyone is in so much fear now.”

Why is Vladimir Putin proposing a constitutional ban on same-sex marriage?

Elizabeth Warren drops out of the presidential race