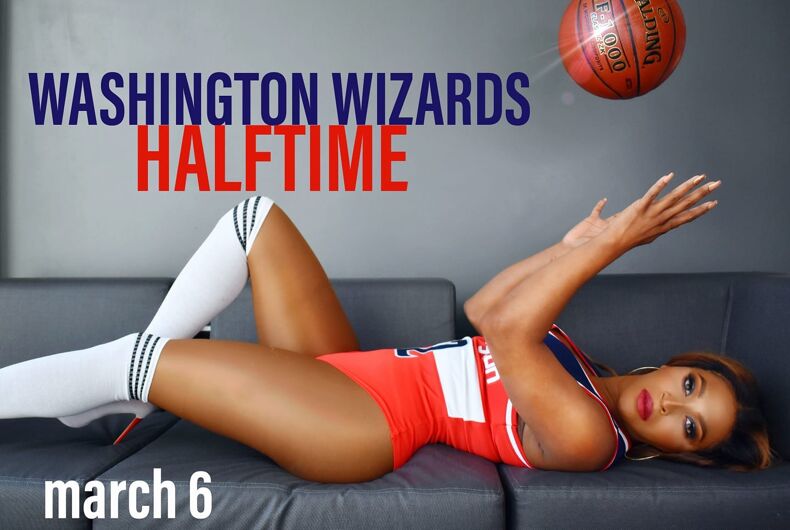 Riley Knoxx, a trans woman and “top Beyoncé impersonator” was invited to perform at the halftime of Friday’s Washington Wizards game against the Atlanta Hawks.

Nicknamed “The Illusion of Queen Bey,” the 38 year-old Knoxx becomes the first openly trans woman to perform at halftime of an NBA game. The decision was announced last week, in anticipation of the Wizards’ Pride Night.

“They reached out to me, believe it or not,” Knoxx told ABC’s Good Morning America. “They have been watching for a while and they’ve been wanting me to perform at their events, but they were just waiting for the right time and space. And it just worked out that because they were watching, that’s how I got this chance.”

Knoxx grew up first with family in California, and then with her grandmother in South Carolina. Both shunned her, so “it was either [Washington, D.C.], or death,” she explains. Since then, Knoxx’s been performing as a Beyoncé impersonator for over 17 years, since the singer’s hit song “Crazy In Love” debuted.

Her biography states that “she specializes in bringing a live concert experience to Beyoncé fans around the world.” In addition to performing in venues such as the 40/40 Club, she is also a contributor to Fox 5 DC and has appeared in Taylor Swift’s video for “You Need to Calm Down,” which earned a MTV Video Music Award. Knoxx has also been featured on reality shows R&B Divas, The Real Housewives of the Potomac, and Braxton Family Values.

“She has mastered her moves, mannerisms and even her makeup – and like Bey, is a force to be reckoned with,” her story states.

For the halftime performance, Knoxx started with “Formation”, then transitioned to “End of Time” and concluded with “Crazy In Love” in the five-minute, thirty-second performance – backed by the Wizards cheer squad and dancers.

The other Pride Night festivities included the performance of the National Anthem by the Gay Men’s Chorus of Washington, D.C. and a postgame dance party hosted by DJ Tezrah, voted Best DJ by the Washington Blade in 2017 and 2018.

“People always ask me, ‘How does it feel to be living your dreams?’ Or, ‘did you dream of this?'” Knoxx said, “and I’m always like, ‘No!’ I couldn’t have dreamed this. I’m living beyond anything I could have dreamed of.”

Watch the full performance on Knoxx’s IGTV channel, or part of it on YouTube below.

March 6th was one of the best nights of my entire life and career. I'm so happy to I've had the opportunity to be the first transgender woman to ever perform at a NBA halftime #fortknoxx #BEYHIVE #topbeyonceimpersonator #beyoncé #BEYONCEIMPERSONATOR #style #fashion #transisbeautiful #girlslikeus #Washington #dc #washingtonwizards #1BEYONCEIMPERSONATOR

Trump & Pence may have been exposed to people with coronavirus