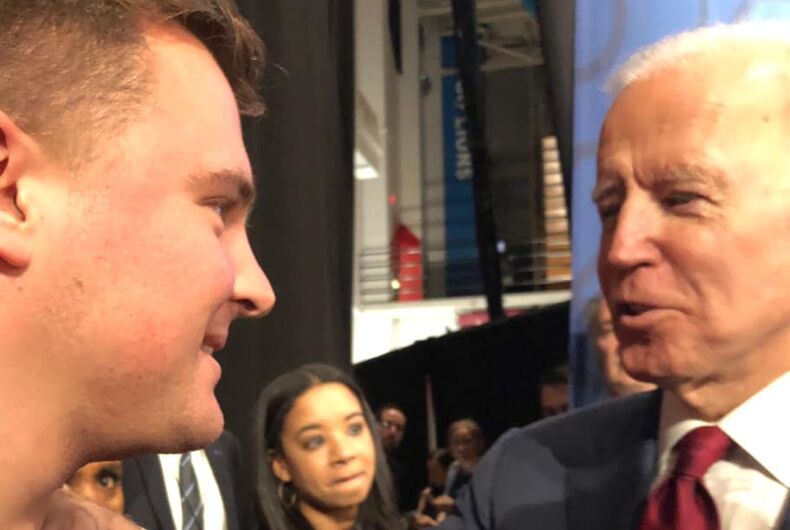 As I wrote in an article back in December 2019, I strongly believed that Pete Buttigieg was the number one choice when it came to the field of candidates for President. He sadly dropped out of the race last week, and though he didn’t win, his contribution to LGBTQ history will never be forgotten. I have no doubt that he will be a force to be reckoned with in the future.

Now that the Democratic primary has narrowed to just Joe Biden and Bernie Sanders (Tulsi Gabbard as well, though most don’t see her candidacy as a serious one), it’s time for us as a community to decide who we think best represents us and who will fight hardest for us if they are elected to the White House.

Related: Tammy Baldwin would be the ideal vice presidential choice for Joe Biden

Both candidates bring their own individual histories and strengths to the table. Both have been generally supportive of LGBTQ rights over the years, but in my mind, it’s Joe Biden that has not only been a vocal advocate – and has also effectively fought for and implemented actual results for LGBTQ equality.

It was Joe Biden, in 2012 as Vice President under Barack Obama, who became the first elected official at his level in the federal government to publicly endorse same-sex marriage, even before President Obama did. Before that, he had been a longtime supporter of hate crimes protections and employment non-discrimination laws.

It is true that in the early 1990s he voted for Don’t Ask, Don’t Tell and the Defense of Marriage Act, but he renounced those positions and has been a strident, vocal, consistent and dependable fighter on our behalf ever since. After leaving office as VP in 2017, he made LGBTQ rights both domestically and abroad one of the main focuses of his non-profit, the Biden Foundation.

Don’t get me wrong, Bernie deserves credit as well. He has been largely consistent in his support of LGBTQ rights, but the question for me is who has the best chance to actually deliver on our priorities if they are elected to the White House. Biden has proven himself to be an effective legislator and dealmaker, and I have no doubt that as President he would reverse the anti-LGBTQ policies of the Trump administration and pass the Equality Act – which includes protections for LGBTQ people ranging from housing to employment and many others.

A crucial factor we should consider is not only which candidate has the ability to beat Donald Trump, but who has the coattails to make sure we keep the House in Democratic hands and also take back the Senate. The numbers on Super Tuesday showed that only Joe Biden has the ability to stitch back together the kind of diverse Obama coalition (African-Americans, older voters, working class white people) of voters that will deliver in states like Georgia, Arizona and North Carolina – not only for President, but crucial Senate races up in November.

I had the honor of meeting Vice President Biden at the Democratic Debate in Los Angeles last December, and though I was still supporting Pete at the time I was truly moved by Joe’s sincerity as he recounted a story of a gay couple he and his father saw kissing when Joe was just a teenager. “Joey, it’s simple – they love each other,” his father said. Joe’s heart has always been in the right place and I have no doubt that he feels a natural affinity and connection to our community.

On Super Tuesday, 10% of people who voted identified as LGBTQ – meaning our community finally has the opportunity to vote in our best interests, and we can make – or break – this election.

As the primaries continue on, I hope you’ll consider joining me in voting for the one man who has what it takes to win this election and deliver real, tangible, lasting change for the LGBTQ community – and that’s Joe Biden.