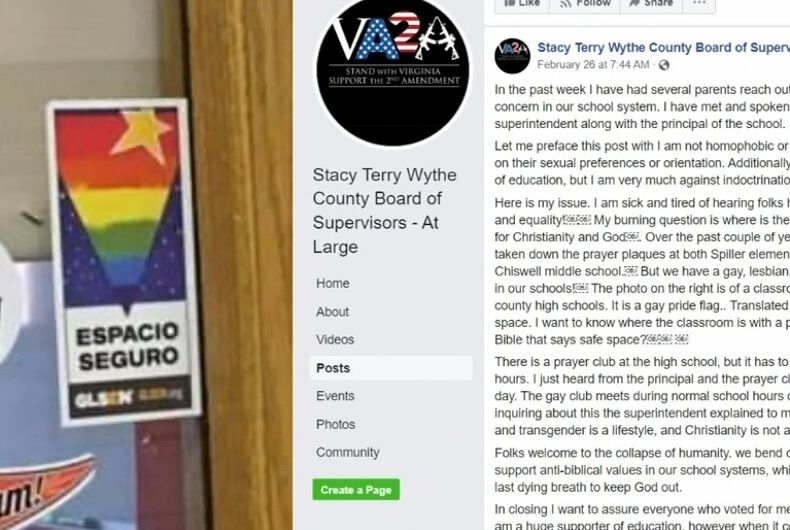 The sticker and the Facebook post.Photo: WSLS screen capture

High school students and parents in Wythe County, Virginia are standing up to a County Supervisor who attacked their school’s LGBTQ student association, calling it a sign of the “collapse of humanity.”

Related: 5th grade teacher grilled a girl about a rumor that she’s gay in front of the entire class

Terry wrote that the school’s “Gender-Sexuality Alliance Club” (GSA) has contributed to “anti-biblical values in our school systems.”

He then falsely claimed that the district superintendent told him that the GSA was allowed to meet on campus while the Christian prayer club wasn’t because being LGBTQ is “a lifestyle, but Christianity is not a lifestyle but a religion.”

“Folks, welcome to the collapse of humanity,” Terry wrote. “We bend over backwards to support anti-biblical values in our school systems, while we fight with every last dying breath to keep God out.”

Terry then wrote that he would keep this issue in mind when voting on school budgets for the coming academic year.

Wythe County Schools Superintendent Scott Jefferies pushed back on Terry’s false statement about the clubs, stating that both clubs are allowed to meet during school hours  and that the teacher is allowed to display the rainbow “safe space” sticker on her door.

Students and parents spoke out publicly against Terry’s post. Parent Shannon Doby said that Terry’s post labeled queer identity opposed to Christianity when many queer Christians, like his daughter, exist.

“My daughter did not choose to be gay, we are Christians, we’ve been in church since the day she was born, she went to Christian pre-school, we have values and we have morals, but I feel like this post was made out of hate, just simply for my daughter being born and being who she is and to say that she’s not a Christian because she’s gay?” Doby said. “I don’t agree with that and I don’t agree with your post.”

Another parent cited the high rate of suicide for LGBTQ youth, and yet another asked the Board to consider ousting Terry.

While the school board doesn’t have the power to kick out Terry, its Vice-Chairperson Ryan Lawson said that Terry doesn’t speak for the entire board and that she’d herself would never let a discrimination matter affect her vote on school funding.

Terry, for his part, said that he appreciated the feedback.

“I appreciate everybody coming out on both sides and I thank people for coming out and showing their passion and that’s it,” he said.

“I do appreciate people coming out,” he said, referring to people attending the meeting.

More students and parents plan on speaking out against Terry’s post at a coming school board meeting this week.