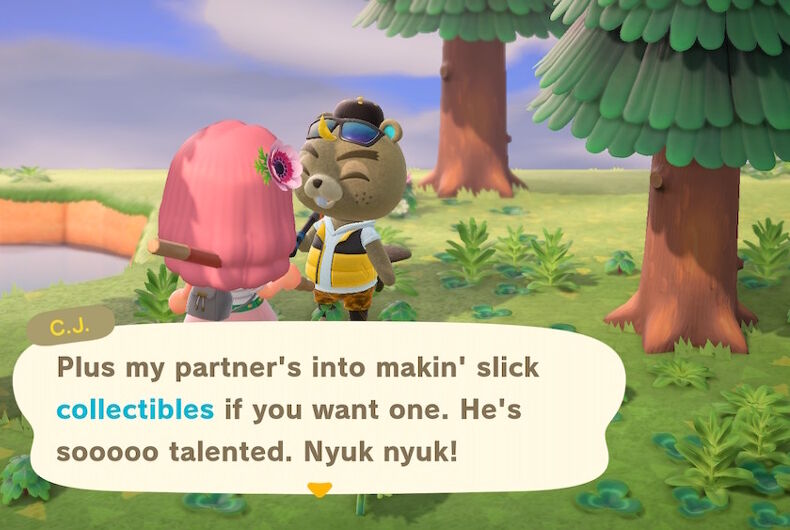 Housebound gamers are flocking to Nintendo’s Animal Crossing, an open-ended “social simulation” video game in which players explore and establish a home in a village of anthropomorphic animals. The latest version of the game, Animal Crossing: New Horizons, features one of the first explicitly out LGBTQ characters in a Nintendo game.

According to Video Games Chronicle, one non-playable character named C.J. repeatedly refers to his male “partner” Flick. Another character, Merry, seemingly mentions a lesbian couple while talking about a “romantic comedy.” Interestingly, the publication says that one of the same-sex references doesn’t appear in the game’s Japanese-version.

Whether or not C.J. is actually gay is somewhat up to interpretation as the beaver’s partner could just be his business partner. However, the way C.J. goes on about his partner’s artistic ability can make one think that his admiration is more than just professional.

“My partner’s into making slick collectibles if you want one,” C.J. tells players. “He’s sooooo talented — nyuk, nyuk. He’s a total artist and I can guarantee these models’ll make your neighbors jealous! Usually he’s all about models of bugs and stuff, but when he’s got a fish to work from, his work is AMAZING.”

The models are just some of the many collectibles players can obtain throughout the game. One Twitter user said that C.J. calls Flick his “friend” in the game’s Japanese version.

Elsewhere in the game, Merry, a cute female cat mentions that she’s a “huge comic fan” before asking players what kinds of comics they like reading. If players respond with “romantic comedy,” Merry says, “YES! Romantic comedies! Ohmigosh, I didn’t know anybody else read those comics but me!”

She then says, “My favorite’s about the shred-tastic Princess of Rocketboarding and her true love, the Princess of Explosions! They search the world for each other but HILARIOUS stuff always keeps them from happiness. Like, one time, a wizard swapped their minds! So they were together… but also further apart than ever! Eventually, they fooled the wizard a bunch and gt their own brains back. It was hilarious AND romantic.”

Here’s a video of Merry’s mention of the same-sex couple.

Animal Crossing: New Horizons also broke new ground in the franchise by allowing players to customize their character beyond the gender they chose at the start of the game. For example, male play can choose hairstyles that were once reserved for female characters, and female players can choose facial hair options usually reserved for male characters. While it’s not non-binary, it’s still a step forward for gender fluidity.

Prior to this, Nintendo titles only featured non-playable characters that were lesbian, gay, or bisexual based on whether human players tried to romance them.

Nintendo also had two ostensibly transgender characters — Birdo, the egg-shooting dinosaur in the original 8-but Super Mario Bros 2 (1988) and Vivian the magical ghost in the RPG Paper Mario: The Thousand Year Door (2004), but their trans identities remained somewhat low-key in the games.