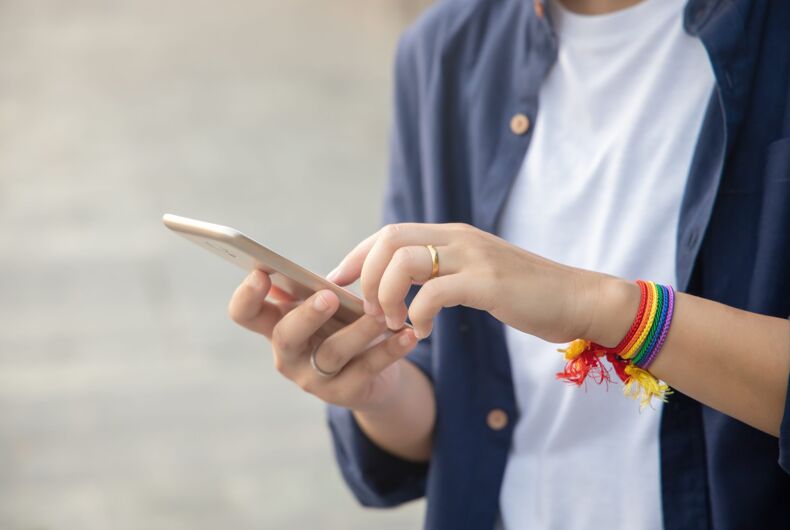 A person with a rainbow wristband uses their smart phone. Photo: 9nong / Shutterstock.com

Sir Tim Berners-Lee, the person who created the world wide web in 1989 and has continued to develop it ever since, had some words to share with his fellow web users. He took to OneZero, an online publication on Medium, to explain how gender inequality is hurting the internet and all of society.

“The Web Foundation has built and published a Contract for the Web…designed to protect and shape a web that is safe, empowering, and available to all,” Berners-Lee wrote. “It’s becoming increasingly clear that we cannot achieve the aims of this Contract unless we address a dangerous trend we are hearing more and more about from our partners globally and working on the frontline: The web is not working for women and girls.”

In his article, the British engineer explained that while gender inequality in society is on the decline overall, statistics show that women are subject to astronomical levels of harassment, abuse, threats, and invasion of privacy – and an overwhelming majority expects that treatment to continue to fester over the years.

This “risks the tremendous opportunities that digital technology offers,” Berners-Lee explains. If women cannot be allowed to exist safely on the internet, it will eventually stop developing.

He goes on to further explain what has led to a majority of women and girls in the world, “especially those of color, from LGBTQ+ communities and other marginalized groups,” became this disadvantaged online.

“First, a majority of the world’s women are still not connected to the internet, largely because they can’t afford it or have no access to the technology they need or the skills to use it,” he says. “Men remain 21% more likely to be online than women, rising to 52% in the world’s least developed countries.”

“Second, for many who are online, the web is simply not safe enough.”

Berners-Lee also calls out many leaders, saying the “action by governments and companies has been too slow and too small.”

“The coronavirus outbreak demonstrates just how urgently we need action…when we need it more than ever, the web has to work for everyone.”

As for the solution, Berners-Lee said putting an end to this inequality is the top priority of The Web Foundation, a non-profit he founded based in Washington, D.C. He also cites the 1995 Beijing Declaration from the Fourth World Conference on Women, which called for major steps to empower women.

He calls for all signing parties to the Contract for the Web, which he created just a year ago, to take the following steps: prioritize the problem, provide better data, embed ‘gender equality by design’, build legal protections and be active bystanders.

In 2007, Berners-Lee received the NAE Charles Draper Prize in engineering and was inducted into the Internet Hall of Fame in 2012.