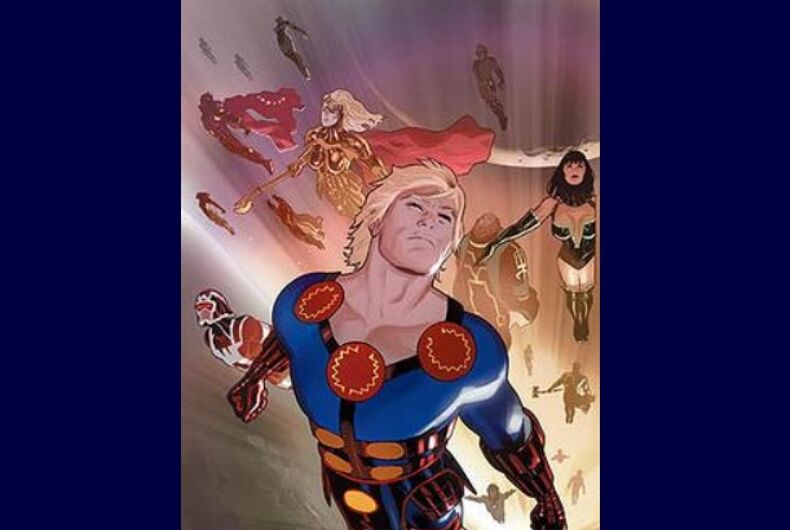 Cover art from The Eternals by Daniel Acuna.Photo: via Wikipedia

A Christian conservative group is outraged that two male characters will kiss in the upcoming Marvel Studios film The Eternals.

Last month, it was announced that actor Haaz Sleiman will play the husband of the Eternal Phastos, who is played by Brian Tyree Henry in the film. In an interview, Sleiman said that he and Henry have “a beautiful, very moving kiss” on screen.

“Everyone cried on set,” Sleiman said. “For me, it’s very important to show how loving and beautiful a queer family can be.”

Well, it turns out some people are incapable of understanding how loving and beautiful queer families are. One Million Moms (OMM), a project of the SPLC designated hate group the American Family Association, has issued a “WARNING!” to its followers that the movie “will include a homosexual superhero and a same-sex kiss.”

The group’s website says that it’s part of an attempt by “the entertainment industry to indoctrinate families with the LGBTQ agenda.”

“Marvel has decided to be politically correct instead of providing family friendly programming,” OMM says. “Marvel should stick to entertaining, not pushing an agenda.”

OMM has a petition that people can sign asking Marvel Studios to make all their characters heterosexual.

“I do not agree with the LGBTQ agenda you are pushing on families in the upcoming movie The Eternals,” the petition states. “Unless Marvel removes the gay superhero and same-sex kiss, my family will not watch this film.”

“Marvel has left conservatives no other choice but to avoid The Eternals.”

The film is due out in November.