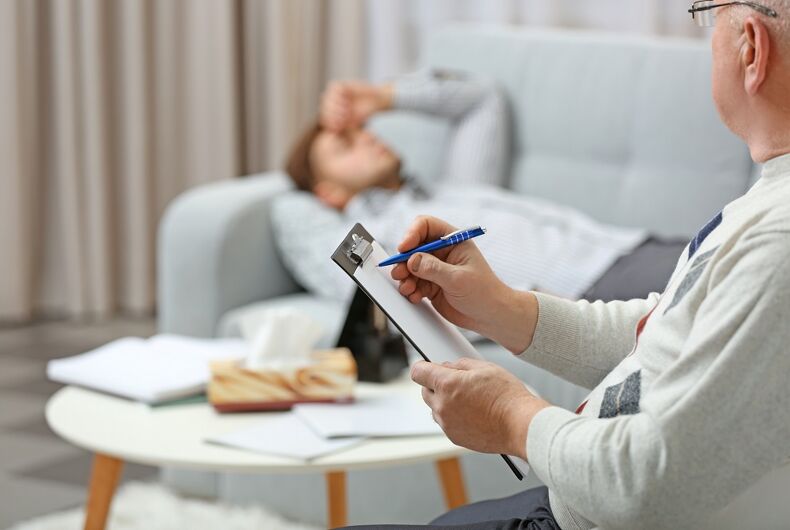 The American Psychological Association (APA), the leading scientific and professional organization representing psychology in the United States, way back in 1976 adopted a position statement asserting: “The sex, gender identity, or sexual orientation of natural or prospective adoptive or foster parents should not be the sole or primary variable considered in custody or placement cases.”

It has issued numerous other resolutions since that time similarly backed equality for LGBTQ people. They also updated earlier resolutions to reflect new research and an evolving legal landscape. The latest set of revised resolutions came out this week.

Related: Christian parents sue their school district to force it to out trans kids

The Resolution on Sexual Orientation, Gender Identity, Parents, and Their Children replaces one from 2004, and now includes data on transgender parents and more recent research on gay fathers and bisexual parents. The resolution asserts that the APA will take a leadership role “in opposing all discrimination based on sexual orientation or gender identity/expression in matters of adoption, child custody and visitation, foster care, reproductive health services, and schooling.”

This is much-needed support, given the discriminatory laws being promulgated by the Trump administration and 11 states.

Additionally, the resolution calls on psychologists to eliminate anti-LGBTQ discrimination in their “practice, research, education, and training.” It says the APA will provide “scientific and educational resources that inform public discussion and public policy development,” in order to assist its members (more than 121,000 researchers, educators, clinicians, consultants, and students) in protecting the rights of sexual and gender minorities.

Finally, the APA says that psychologists should also “consider other dimensions of identity that intersect and compound the challenges of sexual and gender minority parents and their children, such as race, class, ability, and immigration status.”

The Resolution on Supporting Sexual/Gender Diverse Children and Adolescents in Schools replaces a similar 2015 resolution and includes updated references and updated definitions of gender diversity, intersex, and differences of sex development.

It also addresses the issue of restricting bathrooms for transgender children. The language is unequivocal in calling for people at schools “to have access to the gender-segregated facilities, activities, and programs that are consistent with their gender identity” and to avoid “the use of gender segregation in school uniforms, school dances, and extracurricular activities.”

It also “encourage[s] school-based mental health professionals to serve as allies and advocates for gender and sexual diverse children and adolescents,” calls on school staff to honor “the decisions of children, adolescents, and families regarding a student’s gender identity or expression, including whether to seek treatments and interventions,” and “discourage[s] school personnel from requiring proof of medical treatments as a prerequisite for such support.”

This resolution was also reviewed by the National Association of School Psychologists, which has also committed to adopting it.

The Resolution on Opposing Discriminatory Laws, Policies, and Practices Aimed at LGBTQ+ Persons replaces a similar 2007 resolution, but uses more inclusive, updated language. It also takes into account legal changes since that time, including marriage equality.

The APA reaffirms its “leadership role” in opposing anti-LGBTQ policies. In the press release announcing the updated resolutions, the organization notes (rather pointedly, as I read it) that “the intentions of the original resolution are still relevant, and many have been preserved.” Those intentions — to combat discriminatory laws and mitigate the “psychological distress” that “exposure to prejudice and discrimination” can cause for LGBTQ individuals and their children — are still relevant because we are unfortunately still fighting those same battles.

The APA is only one of many professional medical, legal, and child service organizations that have issued formal statements in support of LGBTQ families and individuals. When the APA issued its original position statement in 1976, the not-to-be-confused American Psychiatric Association had three years earlier removed homosexuality from its Diagnostic and Statistical Manual of Mental Disorders (DSM).

It took until 2013, however, for the DSM to stop saying that trans people had “Gender Identity Disorder” — “disorder” implying a mental illness — and instead say that they experienced “Gender Dysphoria,” a discomfort or conflict between their sex assigned at birth and the gender with which they identify.

The support of both organizations backed by respected scientific research has had a clear, positive impact on LGBTQ people in issues from child custody to marriage equality, as I explained in this piece a few years ago.

Given that the current federal administration refuses to listen to scientists on climate change, I doubt they’ll listen to the scientific evidence from these organizations, either. Nevertheless, such evidence, encapsulated in strong resolutions like the APA’s, can have a positive impact on advocacy work at lower levels of government and in guiding educators, health care professionals, and others in their policies and in daily interactions with LGBTQ people.

Why is Vladimir Putin proposing a constitutional ban on same-sex marriage?