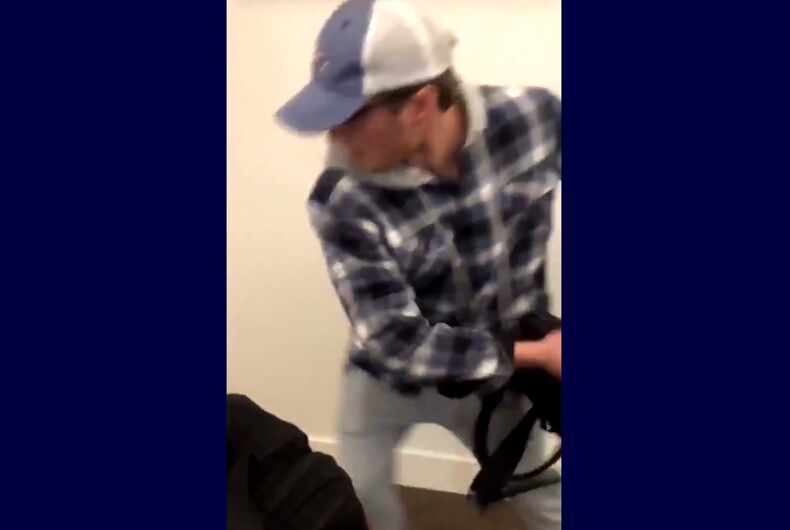 A video posted to Twitter last week shows a student at Chapman University in Orange, California shouting racist and homophobic slurs at other students in a classroom. That student has since been arrested.

The student in the video, 21-year-old Dayton Kingery, admitted he’d been drinking all day.

“You should probably chill, buddy,” said one student in the video as Kingery continued to use the racial slur. Another student tells him to shut up.

“I fucking hate fa***ts, too. How about that?” Kingery said.

“All right, you’ve got to get out of here, bro,” another student responded.

This was recorded this morning during a lecture at Chapman. I’m posting this as a reminder as to why celebrating black history will always be important, why our work is not done. Racism is not “over” #thisisamerica pic.twitter.com/fzAVSmPuW8

A second video shows Kingery, telling another student not to say his name. “You don’t know who I am, guy,” Kingery says. “I’m not kidding. I’ll f**kin’ bury you. I’m worth like $50 million.”

Kingery then started a physical confrontation with another student, calling him a “f**.” It is then that a group of students get up and forces Kingery to leave the classroom.

When the students hand him the wrong backpack, Kingery chucks it down the hallway and stomps on it, telling the student who it belongs to: “Hope your laptop was in there, f**king fa***t.”

I can’t believe nobody beat this kids ass 😂 pic.twitter.com/vhtVc42NdZ

After the incident, Chapman University President Daniele Struppa released a statement on Twitter, saying “appropriate legal and disciplinary processes are being implemented. We are also taking strong interim action to ensure the safety of the classroom involved as well as campus housing.”

Struppa also said that Kingery is “no longer a student” at Chapman, though it is unclear if he was expelled or if he chose to leave.

“This type of behavior is absolutely not tolerated,” Struppa continued. “Together, we must create a safe environment for all students, faculty, and staff. Each one of us is equally responsible and accountable for a campus climate that respects our differences and celebrates our diversity.”

Struppa apologized to the Black and LGBTQ members of the Chapman community and said additional resources will be offered to anyone who needs support.

I also want to extend my deepest apologies to the Black and LGBTQIA communities who were specifically targeted during today’s incident.

Kingery, who is from Greenwich, Connecticut, was arrested following the confrontation. Orange police Sgt. Phil McMullin told the Los Angeles Times that he is being charged with making criminal threats and felony vandalism for allegedly destroying the laptop he threw in the video.

He has also been charged with elder abuse after drunkenly resisting arrest and fighting with a university public safety officer who was over the age of 65.

Kingery posted bond and was released on Wednesday.