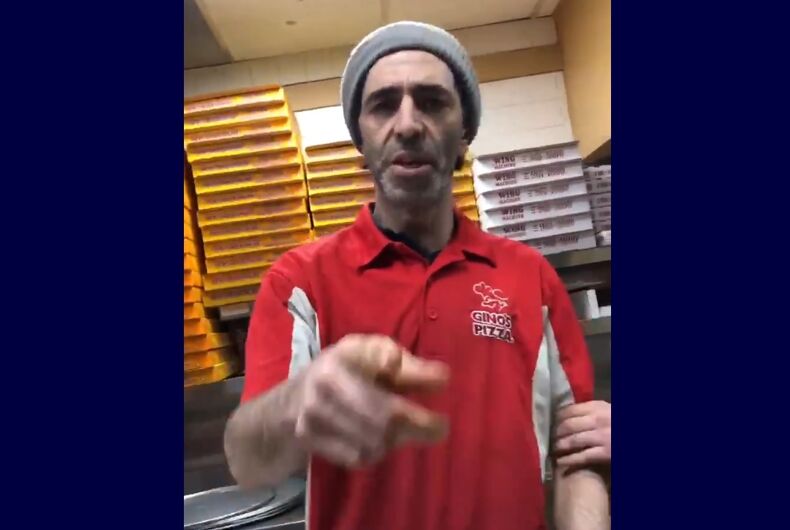 A pizza chain says that a worker has been fired after he was caught calling a customer a “fa***t” in a viral video.

This past weekend, Rob Gill tweeted video of Toronto resident Jeremy Mizu being denied service at a Gino’s Pizza “for being gay.” Gino’s Pizza is a chain with over 100 locations in Ontario.

Related: A gay man was eating pizza with his sister. Then someone beat him with a bike chain.

In the video, Mizu can be heard saying he is allowed to record their interaction, presumably after he had been told to leave.

“You are? Because you’re a ‘fa***t?'” the worker asked, smirking. The worker then walked away.

“Last night I was called a fa***t and told to leave store because I opened the door and it was cold,” Mizu wrote in a retweet of the video. “This is the worker after the manager had been standing up for him. Here he is calling me a fa***t and smirking.”

Last night I was called a faggot and told to leave store because I opened the door and it was cold. This is the worker after the manager had been standing up for him. Here he is calling me a faggot and smirking. https://t.co/PJlns46rZK

The video has been viewed almost 30,000 times on Twitter.

“But either way to call me a fa***t several times for opening the door?” he wrote. “Still unacceptable.”

Mizu said the people he was with asked for a refund after the altercation. They did not get a refund.

In a statement posted to Twitter, Gino’s Pizza said that they have investigated the incident and that it “was clearly a violation of our staff conduct policies and code of ethics that all our employees must adhere to.”

“We take this matter extremely seriously and as a result, the employee involved has been terminated,” the statement said. “Gino’s Pizza is a supporter of the LGBTQ community and apologizes for the actions of this former employee.”

Thank you all for bringing this to our attention. We’re taking this matter very seriously. The employee involved has been terminated. pic.twitter.com/6BtSs1JEC9

Man set fire to a trans woman’s apartment: “Anyone who is a tr***y offends me”